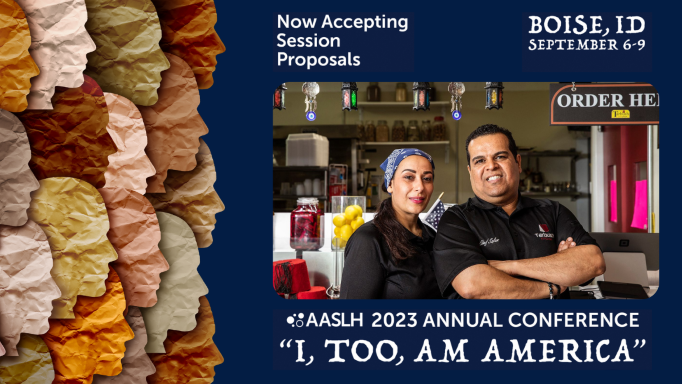 The theme is taken from Langston Hughes’ poem “I, Too,” which was published in 1926, the 150th anniversary of the United States.

In the run-up to 2026, America’s 250th anniversary, we are using the suggested themes from Making History at 250: The Field Guide for the Semiquincentennial as themes for our Annual Conferences.

One of those themes is “We, the People.” This phrase originally had an exclusionary view of American identity but has since taken on an inclusive meaning. Hughes’ poem reflects on who was and was not considered an American in 1926, and as a Black person he asserts his inclusion in the identity of America.

Tomorrow,
I’ll be at the table
When company comes.
Nobody’ll dare
Say to me,
“Eat in the kitchen,”
Then.

Refugees and immigrants are two groups of people who come to America, seeking a place at the table and who want their identities included in the larger American identity.

Boise continually ranks in the top 10 American cities per capita for refugee resettlement and is a certified “Welcoming City” for immigrants and refugees by Welcoming America, a national non-profit.

Recently, Boise has seen growth in restaurants, food trucks, and mobile pop-ups that are being opened by immigrants and refugees, diversifying the dynamics of the city’s culinary offerings. This article highlights the story of some of these refugees and their businesses.

This is a story of not only having a seat at the American table, but of opening tables up to others, and those tables being a path toward economic stability in a new country.

While we include these new community members in American identity, we must also recognize the first people who lived on the lands of Idaho. The state is now home to five federally recognized tribes—the Kootenai, Coeur d’Alene, Nez Perce, Shoshone Paiute, and Shoshone Bannock.

Join Us at the Table
We will explore the complexities of American identity and its connection to history and history organizations at the 2023 Annual Conference. To do so adequately, we need your voice! We are now accepting session proposals. The deadline for submission is December 9.