Earlier this year American Airlines received the following photograph and letter from Leonard L. Haynes III, Ph.D. Senior Director, Institutional Service Office of Postsecondary Education of the U.S. Department of Education. Dr. Haynes wanted to share a moment from his youth, a candid photograph of him and his brother, wearing expressions of excited anticipation, as they prepare to board an American Airlines flight in Columbia, South Carolina in the late 1950s.

“I would like to share an important bit of history that is worthy of sharing with the broader public you serve. I am an African-American, and I have a photo of my brother and me boarding an American ­Airlines plane in 1956 or 1957, departing Columbia, S.C., for Nashville, Tenn. The reason this is important is because the practice of racial segregation was still a part of Southern life and work at the time. The fact that my brother and I are pictured in our Sunday best as young boys boarding a flight in Columbia in the 1950s clearly demonstrates that American Airlines was at the forefront of supporting diversity and inclusion in its operations when it was not the custom nor practice.” 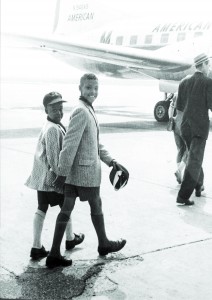 Of course we feel proud and flattered by Dr. Haynes’ kind words and we are bolstered by the lasting impression left with him by this early experience with the airlines. We also gratefully received this photograph into our archives so that we may share his experience and story with a wider audience. Dr. Haynes’ letter and photograph were published in the April 15 issue of American Way magazine, our in-flight publication.

Timothy McElroy is the Head of Interpretation at the C.R. Smith/American Airlines Museum in Dallas, TX.