Hello from Dearborn! This suburb of Detroit is mainly known for two things: Henry Ford and his car company, and for its rich Arab American culture. If you choose to attend the Saturday, September 17th tour “Celebrating Detroit’s Arab Heritage” at the 2016 AASLH/MMA Annual Meeting,  you can visit Dearborn and learn all about that culture at the Arab American National Museum, the nation’s only museum dedicated to the Arab American story. Arab Americans have enriched the economic, political and cultural landscape of American life. By bringing the voices and faces of Arab Americans to mainstream audiences, the museum dispels misconceptions and brings to light the shared experiences of immigrants and ethnic groups, paying tribute to the diversity of our nation. 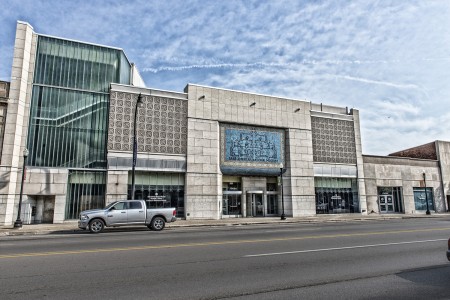 The fact that Dearborn is known both for Arab Americans and Ford Motor Company is not a coincidence. Dearborn became a hub of the Arab American community in the late 1920s when Henry Ford opened the famous Rouge factory. Many Arab immigrants were already working for Henry Ford at his original Highland Park plant, but moved to Dearborn to work in the new state-of-the-art factory. One area of Dearborn in particular, the Southend, began to take on a distinctly Arab American flavor, as grocery stores, restaurants and mosques were established. Within two generations, Arab Americans made up a majority of the population in the Southend and also began moving north to East Dearborn. Because of continued chain migration to the area more than 50% of Dearborn is now Arab American. 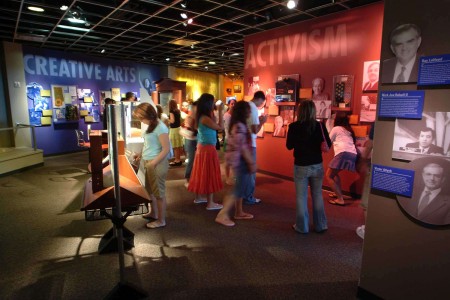 The “Make an Impact” exhibit at the Arab American Museum

In the late 1990s, the Dearborn-based social services organization ACCESS began fundraising to build a museum to showcase Arab American culture. Although the museum is located in Dearborn, it tells a national story. The AANM opened on May 5, 2005, and for the past 11 years has helped tell the story of the Arab American experience through its permanent and temporary exhibits, as well as educational and cultural programming.  Visitors to the museum can learn about the Arab World and its 22 countries and explore Arab American history, culture and contributions in the three main permanent exhibits: Coming to America, Living in America, and Making an Impact. The museum also houses temporary galleries, which are currently showing the exhibition What We Carried: Fragments from the Cradle of Civilization. This moving exhibition consists of images of items brought to the United States by Iraqi and Syrian refugees, along with the story of each item written by its owner.

The exhibit “Coming to America” at the Arab American Museum

Attendees of the AASLH tour will be split into groups of 10-20 people for 90 minute, docent-led tours of the museum. Afterward, everybody will join back up for a conversation with museum staff from the Education, Curatorial and Library & Research departments. This conversation will allow participants to learn more about the behind-the-scenes work of the museum, and will allow plenty of time for questions. Lastly, you can’t visit Dearborn without eating the food! The museum will provide lunch and desserts from local Arab American restaurants for all participants. We hope to see you in September!

For more information on tours, events, workshops, and sessions at the 2016 AASLH/MMA Annual Meeting in Detroit, download the Preliminary Program. This year’s Annual Meeting will be held at the Cobo Convention Center in Detroit, Michigan from September 14-17. Learn more & register on the Annual Meeting homepage. 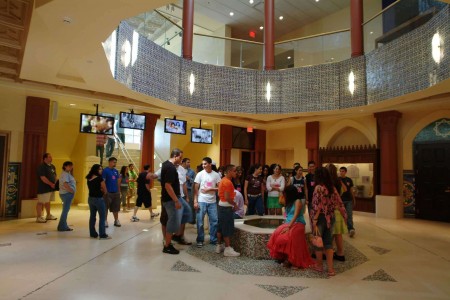 Visitors in the courtyard of the Arab American Museum