Detroit Historical Society’s Beginnings as “Highest Museum in the World”

Detroit Historical Society’s Beginnings as “Highest Museum in the World” 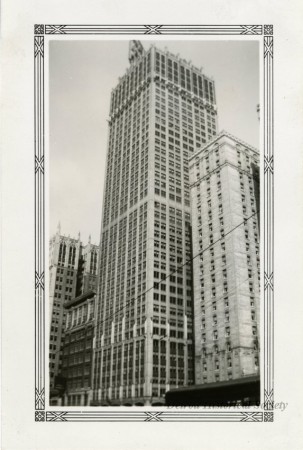 Detroit’s Barlum Tower housed the first Detroit Historical Museum on its 23rd floor between 1928 and 1944.

By 1940, the nineteen-year-old Detroit Historical Society had outgrown its humble beginnings as a volunteer organization that hosted monthly lecture series and collected historical artifacts. Gracie Krum, the Society’s first Secretary, noted, “Furniture and household effects as well as personal belongings … were being destroyed or turned over to antique dealers.” In short, Detroit needed a historical museum.

The Society’s first museum opened in November 1928 in a large room on the 23rd floor of the Barlum Tower. They often called their home “The ‘Highest’ Museum in the World.” In 1940, the Society noted that “the Twelfth Anniversary of the Museum was given no celebration other than an informative article prepared by Mr. Hampton for newspaper publicity.” It wasn’t that they were nonplussed by the anniversary; they had bigger plans that occupied their attention.

The reminiscence meetings included a presentation by a historian, but also devoted time for attendees to share their memories. Topics included remembering nineteenth century political and business leaders, city landmarks and neighborhoods. 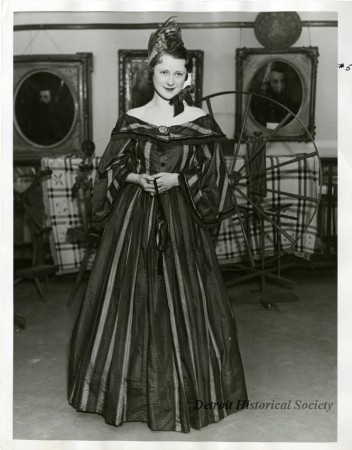 A Society volunteer dons 1880s fashion as part of an event at the Detroit Historical Museum, c. 1940.

Museum talks combined celebrations, family programs, and demonstrations, including the January 27th “Indian Day,” during which there was a “presentation to winners from four schools of cash prizes offered by Aboriginal Research Club in [an] essay contest on Indian Chiefs.” They also included, at least twice a year, a spinning and weaving day, which boasted a “demonstration of carding and spinning by Miss. Catherine A. MacKinnon.”

Perhaps the most interactive of the Society’s programs was its annual Hobbies Days. In 1940, the event’s press release stated, “See the Museum’s completely furnished, electric lighted, six room 50-year-old doll house and our dolls. All hobbyists are asked to exhibit their collections and sell, buy or swap.”

The Society was also working to build its reputation in the museum field. It joined the American Association of Museums in 1940, after the organization held its 35th Annual Meeting at the Detroit Institute of Arts. Also, in the June 17, 1941 Society minutes, this brief notation appeared:

“The American Association for State and Local History invited the Detroit Historical Society to send information for inclusion in its forthcoming Handbook of Historical Societies and Agencies of the United States and Canada.”

It is the first record of the Society’s involvement with AASLH.

The remaining decade saw dramatic changes to the Society. In July 1944, it entered a partnership with the City of Detroit, specifically the Detroit Board of Education and its Wayne University. Together, the two groups moved the museum to a historic home on campus and increased student access to the collection. 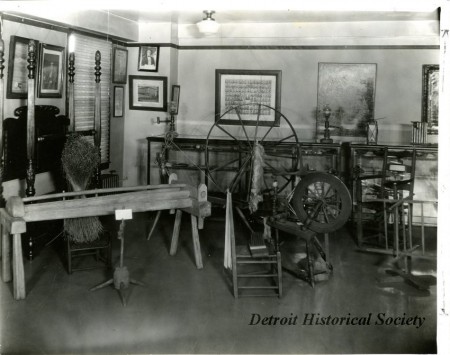 A view of the first Detroit Historical Museum and its permanent exhibition, c. 1940

In August 1945, the Society resolved to transfer its funding and collection to the city. It required that the city create a Historical Commission to take over ownership and responsibility of the 15,000 item collection, and use $250,000 that the Society had raised to construct a new museum. It also required the city to provide free office space for the Detroit Historical Society in the new museum.

By 1946, the transition was complete. For the next 60 years, the Society and the City worked together to build the Detroit Historical Museum in 1951 and the Dossin Great Lakes Museum in 1960 – creating the modern museums that the Society manages today.