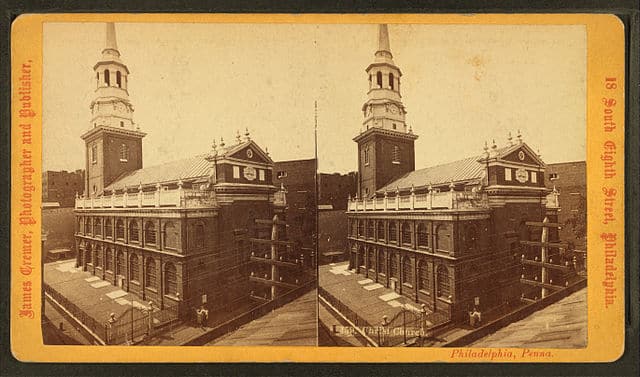 One of my favorite historical sites to visit whenever I am in Philadelphia is Christ Church. Beyond its obvious architectural and aesthetic beauty, the church has been the scene of numerous historical events. However, as a historian of religion and politics in early America I am particularly keen on the role the church played in the politics of the American Revolution.

Between worship services, the staff at Christ Church conducts tours. Deeply knowledgeable about the building and its history, they can point out the very pews where illustrious members of the Continental Congress sat, including George Washington. I think that professional historians and curious members of the general public alike enjoy envisioning the country’s founders seated in that space and I suspect that many have sought to sit in the same spot in an effort to recapture something close to the same sensory experience that the figures of the past felt.

Yet, when I “walk the fields of history” at Christ Church (or should I say, “the pews of history?”), my attention is on the front of the chapel. In this space, my attempt to recapture the sensory experience of individuals now long-deceased tends to focus on the priest behind the pulpit, and one priest in particular: Jacob Duché. 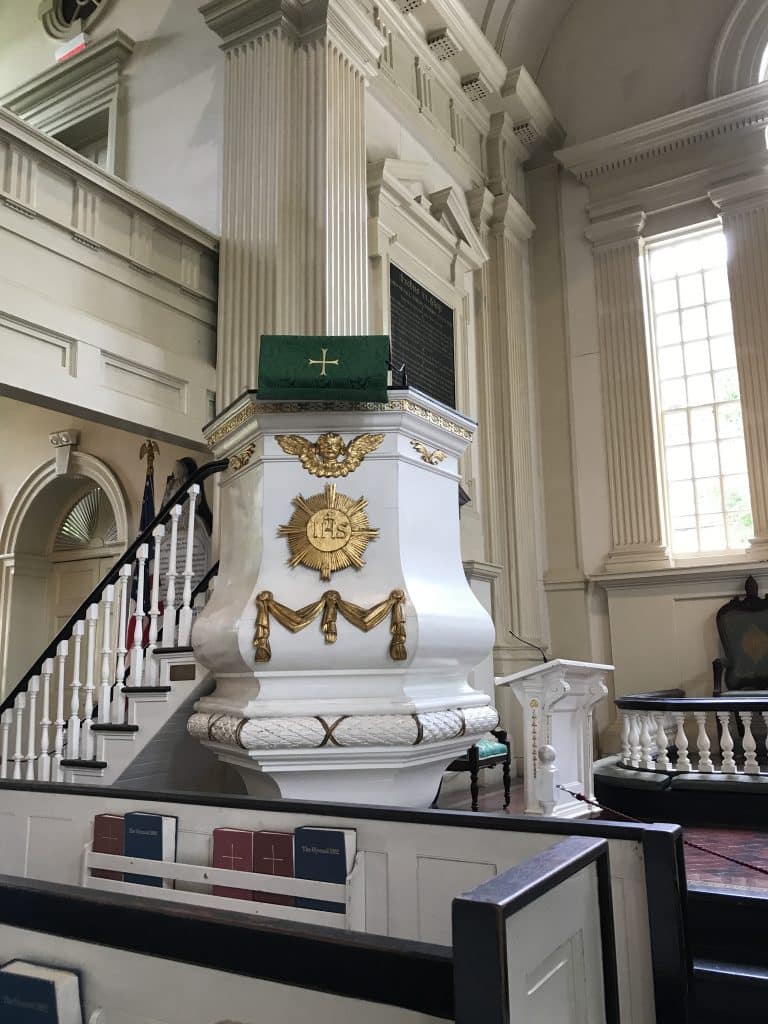 For many Anglican priests in the British colonies, the question of whether or not to alter the church’s liturgy was one without an easy answer. As priests, they had each taken an oath of loyalty to the church, and to the King as its ecclesiastical head. In theory, this meant that no matter what they thought about the fairness of imperial policies regulating affairs in America, no matter what side they identified with amid political protests that eventually transformed into violent revolution, these clergymen were to remain true to their oaths. Replacing King and Parliament with Congress in the liturgy would certainly run against that oath. Yet, there were several Anglican clergymen who, like Duché, felt justified making the liturgical change.

In October 1776, Duché resigned his chaplaincy in Congress, citing as reasons his poor health and a need to focus on his congregation. Nevertheless, in carrying out his regular ecclesiastical duties, he continued to recite the altered versions of the prayers during worship services. But then his circumstance changed. In September 1777, the British Army descended on Philadelphia. Congress and a large number of patriots fled, and the army occupied the city. Duché, however, remained. On the first Sunday following the start of the British occupation, Duché prepared to lead his congregation in its worship services, but on this day, his pews were filled to the brim with British soldiers. Duché had an important decision to make. He could read the day’s prayer as prescribed by the Church of England, or he could read the altered version. Duché chose the former. Perhaps he hoped that one penitent act of loyalty would be enough to compensate for the previous three years of patriotic preaching. But he had no such luck. When he exited the church after the service, he was arrested and imprisoned by British officers.

The British only held Duché captive for one night, but he left any of his remaining patriotism in his cell. Perhaps as a condition for his release, Duché wrote a letter to George Washington imploring him to surrender to the British. In explaining his change of heart, Duché insisted that he had never supported independence. Indeed, he said that it had contributed to his decision to resign the chaplaincy. He thought that it was a step too far in opposing British imperial policy, as unjust as Duché may have thought that policy was. But there was more to this priest’s delayed confession than apprehension over the issue of independence. He cited his low opinion of the men then in Congress and questioned their ability to successfully prosecute the war. As he saw it, the deficiencies in Congress were compounded further by the deficiencies of the army it created. The lack of martial discipline and the frequent desertions all made the war a hopeless endeavor for Washington, and Duché believed that his inevitable defeat would have stinging consequences for American life for years to come. “Humanity itself,” Duché implored the general, “calls upon you to desist.”

Of course, Washington did not desist. He did, however, send Duché’s letter to Congress, which in turn had it published. As a result, Duché was forced to flee to England to preserve his livelihood, and maybe even his life. 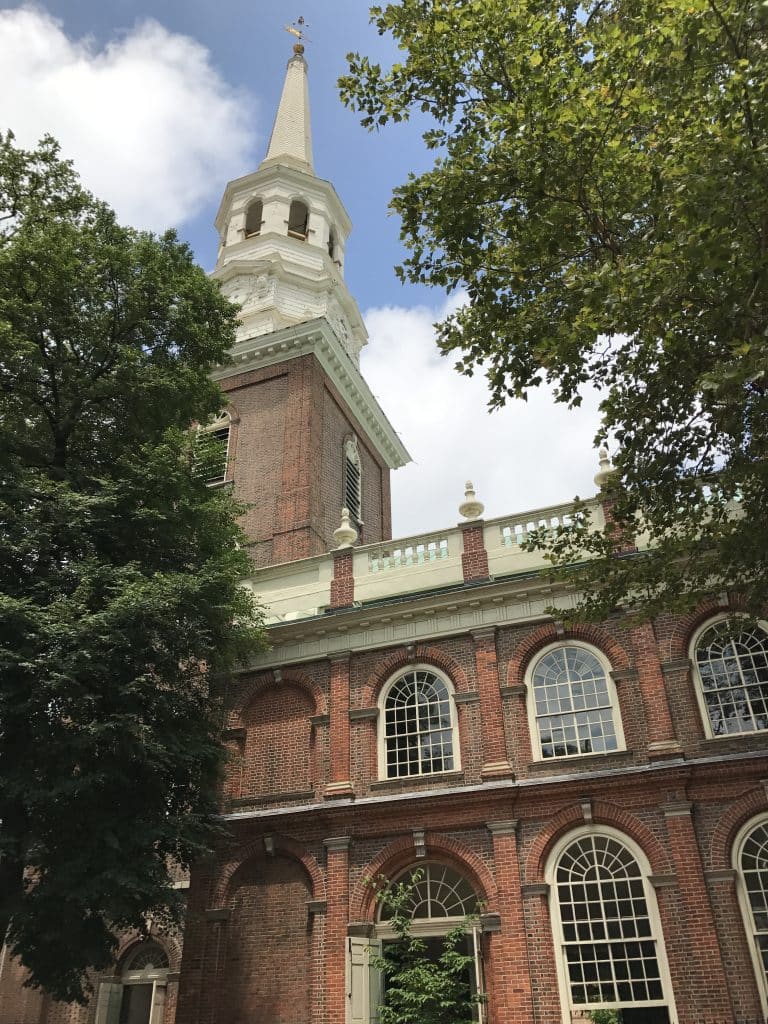 When I step into Christ Church in Philadelphia, the scene I try to envision more than any other is that of an anxious Duché looking out at a sea of red military uniforms trying to determine how to pray. I try to wrap my head around all that was at stake in this moment and how consequential the decision to pray—or not to pray—for the king was for Duché. It is easy for us today to think of choosing sides in the American Revolution as a fairly straightforward task, but the reality is that for many Americans, the decision was fraught and made within a web of allegiances often at odds with one another. For me, at least, this complicated aspect of American Revolutionary history that unfolded in communities throughout the thirteen British colonies is encapsulated by the different prayers Duché spoke on different occasions in the confines of Christ Church.

Spencer W. McBride, Ph.D., is a historian at the Joseph Smith Papers Project and the author of Pulpit and Nation: Clergymen and the Politics of Revolutionary America (University of Virginia Press, 2016).