Success with a Twist: The Unexpected Benefit of “Risky” Programming

Success with a Twist: The Unexpected Benefit of “Risky” Programming

The Alexander Ramsey House in St. Paul, Minnesota is an 1872 house museum managed by the Minnesota Historical Society (MNHS). In April 2012 the Ramsey House started hosting History Happy Hours as a monthly public program series. The idea for the program came about in 2011 during the Ramsey Redevelopment Project– an effort to make the site more financially sustainable. New ideas for revenue streams and programs came through audience research. Throughout the project, focus groups and surveys indicated an interest in social experiences at the site and in experiences that incorporated food and drinks. Based on this data, we decided to pilot a monthly program called History Happy Hour.

For the past several years, museums across the country have been exploring ways to engage young adults – a typically underrepresented demographic among museum-goers. A lot has been written about how to engage young adults not only as visitors, but also as donors and sustainers. In Minnesota, “Millenials” (people younger than 34) represent a huge potential audience. So we decided to design History Happy Hour with a “Millennial” audience in mind, and try to tap into this new, non-traditional house museum audience. 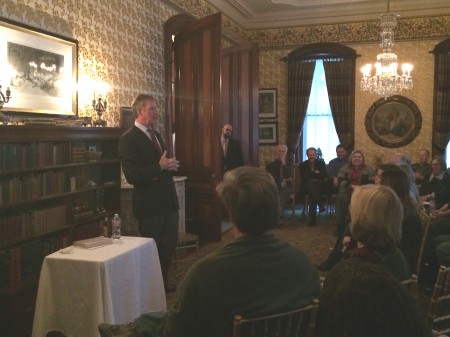 History Happy Hour is an informal lecture series, held from 5:30 to 7:30 PM on the last Thursday of the month, in the furnished parlor of the Ramsey House. Guests get two drinks (no red wine) and snacks with the price of admission. Every month features a different topic and guest speaker (ranging from tintypes with a local librarian to labor history with the mayor). We try to identify a guest speaker who will be engaging and informal and then work with them to choose a historical topic that they feel excited about. In other words, we focus on format first, presenter second, and content third. Before and after the talk/ demonstration guests can wander the first floor of the house and mingle among the artifacts. Aside from the presentation in the middle, it’s a fairly unstructured program, with the drinks and atmosphere of something more like a donor event, but the content and educational objectives of a traditional house museum program. We feel very comfortable calling this mission-based programming. But that’s a whole other conversation.

While the premise is pretty simple, it also represents a bold move for a house museum that swore by stanchions only a year earlier. To those of us managing the program, History Happy Hour felt like a risk. It was non-traditional, introduced food and drinks in a furnished house museum, and had the potential to come across as disrespectful. We thought that we might alienate our traditional audience (MNHS members and people who like us just the way we are, thank you) in our efforts to court a new one.

So did we reach a new audience? Who did we alienate along the way?

At first glance History Happy Hour has been a great success. Programs sell out, attract first-time visitors and encourage repeat visitation. It’s been an encouraging and exciting two years. And so far no tipsy guests have knocked down any vases (hooray!). But a few months into the program we noticed something interesting: This non-traditional program was attracting a fairly traditional audience.

Not only are most of the people coming to History Happy Hour older than our “Millennial” target audience, but most are MNHS members. On average, MNHS members make up about 75% of HHH guests. The average age of History Happy Hour online survey respondents is 44 and over 20% are older than 60. Certainly the program has attracted more “Millennials” than most past programs at the Ramsey House, but not as many as we expected.

This trend might be related to the way the program is promoted. Members have the benefit of early notice through event listings in their member publications and e-newsletters. The general public doesn’t get the same kind of direct notice of programs and events, and may not even hear about a History Happy Hour before it’s sold out. Case in point: The May 29, 2014 program sold out by May 6th and only 3 of the tickets were purchased by non-members.

So while we aren’t having the kind of success with History Happy Hour that we thought we would, we are having a different kind of success. We set out to expand the site’s audience by attracting a younger demographic, but instead found a new way to engage with our existing audience. Older guests haven’t been put off by the concept (“I love having a drink in a historic home!”) aside from the occasional reminder of how to serve them better (“More chairs!”). We assumed they would be more risk-averse and more conservative, but we’ve found that the psychographics of our History Happy Hour guests matter much more than their demographics. These are history lovers who want to have a social, novel experience in a historic atmosphere.

We have also discovered a nice recipe for encouraging repeat visitation among members. The social atmosphere and changing themes have resulted in a group of regulars. Repeat customers represent 40-70% of ticket buyers every month. And since the program has only been going on for two years, these are guests who are coming to multiple History Happy Hours in the same year. That’s pretty amazing when you consider that most house museums struggle to bring back visitors more than once. And though our members get a discount, they do still pay for the program.

Rachel Abbott is Program Associate for Historic Sites and Museums at the Minnesota Historical Society in St. Paul. You can visit the Alexander Ramsey House during the AASLH Annual Meeting September 17-20.