The Museum of the Bible: Thoughts on Museum Location and Historical Timing

The Museum of the Bible: Thoughts on Museum Location and Historical Timing 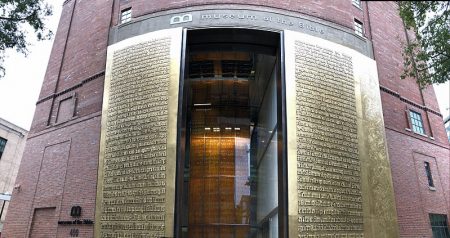 This past March, I attended a research methods workshop at the National Museum of the American Indian (NMAI) in Washington, D.C. The workshop encouraged scholars to enhance their current projects by utilizing museum collections—an obvious message for many of you, but one that numerous historians traditionally overlook. NMAI curators and archivists toured us through their off-site collections as well as their public exhibits, all while emphasizing best research practices in material culture. They challenged us, for example, to move beyond simply pulling words from a journal page and unpack the historical contribution that the journal itself can offer. We left the workshop with a wealth of “new” materials found outside the document-filled archive.

So what does my experience at the NMAI workshop have to do with the Museum of the Bible? Twice a day, I would walk along 4th Street in D.C. and pass the recently opened Museum of the Bible. Flanking the museum’s main entrance are two forty-foot-tall bronze gates, the Gutenberg Gates, covered in Latin translations of Genesis 1 and mirrored to appear as typeset. Resting atop this imposing 430,000-square-foot building is a two-story glass scroll which offers a panoramic view of the National Mall. As I passed each morning and afternoon, noisy tour buses and large crowds lined the front sidewalks waiting to enter this state of the art and provocative museum. Clearly influenced by the workshop, I began contemplating how the building itself, its location, façade, and scores of eager visitors, could inform my understanding of American religious history. 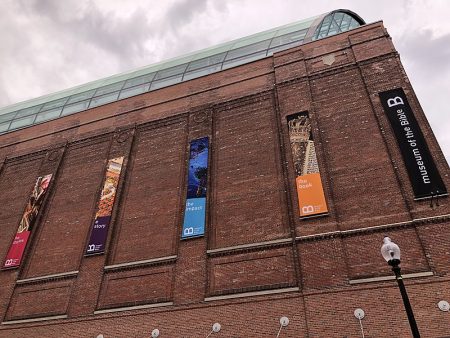 To offer some background, this $500 million privately funded museum was largely sponsored by the family of evangelical billionaire David Green. The Green family built their fortune through the Hobby Lobby craft store chain and are well-known for supporting conservative Christian values through their business. In 2014, for example, the U.S. Supreme Court sided with the Greens in Burwell v. Hobby Lobby, a controversial ruling that allowed for-profit corporations to assert religious freedom claims. The family is also known for their involvement in the antiquities trade, and their private collection eventually became the core of the new museum’s holdings. The Green family grabbed headlines in 2015, however, after reports surfaced that U.S. Customs and Border Protection seized falsely labeled boxes containing nearly 3,450 biblical artifacts. Hobby Lobby Stores, Inc. would later accept responsibility for smuggling biblical artifacts into the United States. But the scandal, along with the family’s hardline for-profit evangelical message, continues to draw national criticism.

With that context in mind, let me suggest that our analysis could and should reach beyond the controversies surrounding Hobby Lobby and their brand of Christianity to examine the Museum of the Bible’s location and historical timing as a national phenomenon. Certainly, the museum represents more than just one person or family. To do so, let’s consider the perspective of those walking by the museum: How does the museum’s location influence their understanding of American religious history? How does the building inform their present worldview? Why construct a Bible museum in Washington, D.C. in 2017? And why hasn’t one been built before? All basic yet fungible inquires that could be used to support our current historical projects.

Museum of the Bible location indicated with yellow circle.

To be sure, I am not the first to note the museum’s location merely blocks away from the U.S. Capitol Building and just steps away from the heart of world’s largest museum complex. Many have taken issue with the museum’s prominent placement and consider it a brazen attempt to challenge the separation of church and state. An additional problem regarding the museum’s location, according to some, is that it incorrectly projects a nonsectarian, academic, and tolerant message to the passing public. On the other hand, some in favor of the museum interpret its location as a victory in the so-called Culture Wars—the supposed battle over the “soul of America.” For them, the museum has become a concrete symbol that reinserts Christianity back into the nation’s capital and historical narrative. But what is motivating or urging this enormous expenditure of personal wealth to build the Museum of the Bible in Washington, D.C.? And why has the museum’s location stirred opposition? Have our national museums, like the Smithsonian Institution, ignored the historical value of the Bible or Christianity in their exhibits?

The answer, of course, is no. Most, if not all, critics would agree that the Holy Bible is an important cultural document and an essential volume for understanding America’s past. The National Museum of American History’s “Religion in Early America” exhibit, for example, displays a copy of George Washington’s Inaugural Bible along with the Jefferson Bible or The Life and Morals of Jesus of Nazareth (reproductions of this Christian text are also sold in the gift shop). The exhibit also includes John Eliot’s translation of the Bible into Wampanoag, an original manuscript from the Book of Mormon, the only Muslim instructional text known to have been written in America by an enslaved African man, and a Torah scroll from 1654.

Additionally, American bibles, along with many other religious artifacts can be found, outside the Smithsonian’s religion-specific exhibits. For example, the National Museum of African American History and Culture displays copies of Nat Turner’s and Harriet Tubman’s bibles. Likewise, the NMAI’s exhibit, “Our Universes: Traditional Knowledge Shapes Our World” interprets individual Indigenous communities’ cosmology and spirituality. Lastly, “The Great Inka Road: Engineering an Empire” exhibit presents Inka cosmology as the driving force behind their hemispheric expansion. Clearly, the Bible, along with the continent’s diverse religions, are not absent from the national museum complex, and such examples suggest that historical engagement with religion are present and part of our shared national heritage.

Why then, at this particular moment, is there an urgency for greater historical engagement with evangelical Christianity and the Bible? I’ll let you and future scholars decide. All I’m suggesting, however, is that we engage with museum location and historical timing, as it can provide a wealth of knowledge that is often overlooked. I am optimistic that we will more often apply unlikely forms of religious materials to enlighten our presentations of the past. In short, we can better historicize words from a journal or text in a museum by utilizing the material that houses them. Let’s challenge ourselves to explore how and why our local religious museums or monuments were established, and consider how they will deepen our understanding of American religious history.