WWI Memorial Design Finalists on Exhibit in DC til Dec 22

WWI Memorial Design Finalists on Exhibit in DC til Dec 22

The U.S. World War I Centennial Commission will publicly exhibit the five finalist design concepts for the national World War I Memorial in Washington D.C. 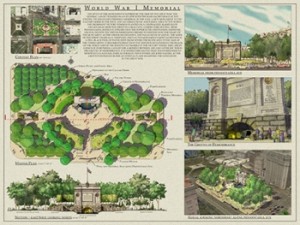 This exhibit will consist of newly-submitted artwork showing each Finalist design concept in full detail.

The design competition for the memorial commenced May 21st, 2015. Stage One of the open international competition drew more than 360 submissions from around the world. The finalists from Stage One were selected by a special competition jury, and announced on August 4th.

Since that time, the Commission has been working with the National Parks Service, the National Capital Planning Commission, the U.S. Commission of Fine Arts, and other stakeholders, to further develop the design concepts. The winner of the design competition will be announced on January 25th, 2016. 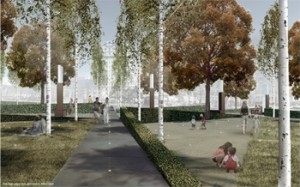 “An American Family Portrait Wall in the Park” by STL Architects in Chicago.

The World War I memorial will be created in downtown Washington DC, at Pershing Park, at the corner of 14th Street and Pennsylvania Avenue. The site was authorized by Congress in 2014.

The historic John A. Wilson Building houses the Executive Office of the Mayor and the Council of the District of Columbia. As DC’s City Hall, the building is open to the public, and plays host to the city legislative processes. 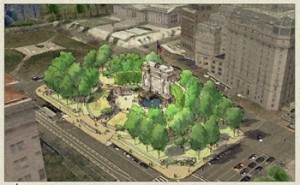 The U.S. World War I Centennial Commission was established by Congress in 2013 to develop and promote educational and commemorative programs to honor the role of the United States in World War I.

Read more about the U.S World War I Centennial Commission.

Read more about the John A. Wilson Building