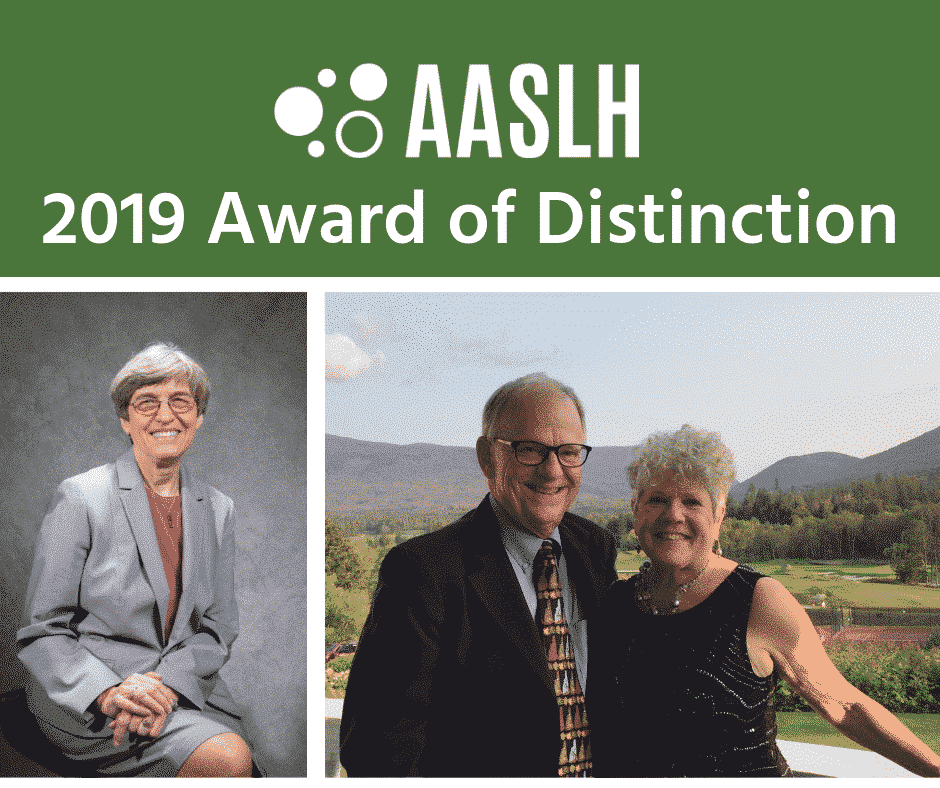 NASHVILLE, TN—The American Association for State and Local History (AASLH) proudly announces that Sandra Sageser Clark and John and Anita Durel will receive the Award of Distinction on August 30 at the association’s Annual Meeting in Philadelphia, PA.

Sandra Sageser Clark is the Director of the Michigan History Center, a position she has held for the past twenty-eight years. She believes that history is important and wants all citizens to experience the thrill of discovery, the intrigue, and the understanding it brings to its students. In addition, Clark tirelessly advocated for reauthorization of the Institute of Museum and Library Services and led the way in the push for AASLH to assert the need for formula funding for museums.

John and Anita Durel founded Durel Consulting Partners in 1997. They have served the museum community with professionalism, integrity, and an unbridled passion for building great organizations and helping those in the field become great leaders.

The Leadership in History Awards program was initiated in 1945 to build standards of excellence in the collection, preservation, and interpretation of state and local history. The Award of Distinction is given infrequently in recognition of long and distinguished service and contributions on the part of a person working in state and local history who is recognized nationally as a leader in the profession. An individual must have demonstrated the highest standards of performance and professional ethics.

“All of us across the history community look up to colleagues who have advanced the field,” said John Dichtl, AASLH President and CEO. “This year’s Award of Distinction recipients—Sandra Clark and John and Anita Durel—continue to have that kind of impact and also have been extremely generous in sharing their wisdom, creativity, and clarity. It is a pleasure to see each of them receiving AASLH’s highest honor for their remarkable careers.”

Sandra Clark received her B.A. and M.A. in history from Michigan State University. She began her history career teaching Canadian and American history at Plattsburg State University College of New York and Michigan State.  She interrupted her work on her Ph.D. dissertation in the history of Canadian-American relations to become an editor and speechwriter for the Canadian Embassy in Washington, D.C., in 1975. Sandra returned to Michigan as editor of Michigan History Magazine in 1979. She was deputy director of Travel Michigan for three years before she became director of the Michigan History Center in September 1991. Her professional service has included the AASLH board, the Michigan Museums Association board, the Association of Midwest Museums board, and the Automobile National Heritage Area board. She was the 2009 recipient of the Michigan Historic Preservation Network Leadership Award and the 2017 recipient of the President’s Award from the Michigan Museums Association. Currently she is a member of the Fishtown Preservation Society Board of Directors and the Land Information Access Association Board of Directors.

John Durel’s work in museums included time as the Director of Education and Assistant Director at Strawbery Banke Museum, as Assistant Director at the B&O Railroad Museum, and as Assistant Director and Director at the Baltimore City of Life Museums. Concurrently, Anita Durel built a career in fundraising and development, including leadership positions at institutions including Johns Hopkins University and the Association of Fundraising Professionals. Since forming Durel Consulting Partners, they have assisted numerous museums and CEOs of history organizations, made presentations, and published articles to inform the museum community. They also taught museum studies at Goucher College and Johns Hopkins University. Additionally, John served as the Executive Director of the Seminar for Historical Administration, now the AASLH History Leadership Institute, and both were founding leaders in the History Relevance Campaign.

The 2019 awards will be presented at a special banquet at the Philadelphia 201 Hotel on Friday, August 30, from 6:30 to 9 p.m., as part of the AASLH Annual Meeting. A full listing of award recipients can be found at: https://aaslh.org/aaslh-announces-2019-leadership-in-history-award-winners/. For more information, contact Bethany Hawkins at hawkins@aaslh.org.

Learn more about #AASLH2019 and the Leadership in History Awards.