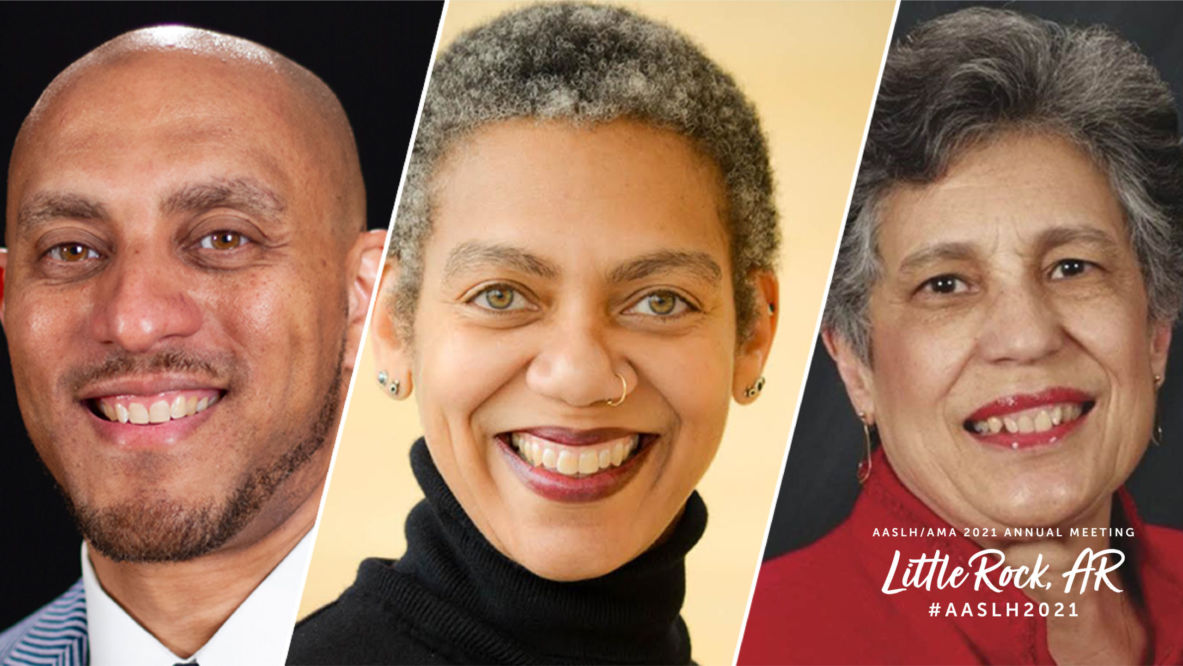 AASLH is pleased to announce our keynote speakers for the 2021 AASLH/AMA Annual Meeting in Little Rock September 22-25. We are excited to hear what these historians and history-maker have to say about Doing History/Doing Justice.

Thursday, September 23
8:30-10 am (includes breakfast)
Dr. Hasan Kwame Jeffries is associate professor of history at The Ohio State University where he teaches courses on the civil rights and Black Power movements. Hasan is the author of Bloody Lowndes: Civil Rights and Black Power in Alabama’s Black Belt, which tells the remarkable story of the African American freedom movement in Lowndes County, Alabama, the birthplace of Black Power. He is also the editor of Understanding and Teaching the Civil Rights Movement, a collection of essays by leading civil rights scholars and teachers that explores how to teach the civil rights movement accurately and effectively. Hasan’s current book project, In the Shadow of Civil Rights, examines the Black experience in New York City from 1977 to 1993. It connects key political and cultural events, such as the youth rebellion in the South Bronx, to the evolution and implementation of public policies that changed Black communities forever.

Hasan has worked on several public history projects. From 2010 to 2014, he was the lead historian and primary scriptwriter for the $27 million renovation of the National Civil Rights Museum at the Lorraine Hotel in Memphis, Tennessee, the site of the assassination of Dr. Martin Luther King, Jr. He hosts the podcast “Teaching Hard History,” a production of the Southern Poverty Law Center’s educational division, Teaching Tolerance. And he regularly shares his knowledge of African American history and contemporary Black politics with the public through lectures, workshops, op-eds, and radio and television interviews. He has also contributed to several documentary film projects as a featured on-camera scholar, including the Emmy nominated, four-hour, PBS documentary Black America Since MLK.

Hasan resides in Columbus and enjoys traveling to the South to visit friends and returning to his hometown of Brooklyn to visit family.

Friday, September 24
12:30-2 pm (includes lunch)
Dr. Rhonda Y. Williams is a professor of history and the John L. Seigenthaler Chair in American History at Vanderbilt University in Nashville, Tennessee. Williams, an OAH Distinguished Lecturer, is a historian of low-income black women’s and marginalized people’s experiences, everyday lives, politics, and social struggles. Her research contributes to the rethinking of gender, political identity, citizenship, civil rights, black liberation struggles, and interactions with the U.S. state. She is the author of the award-winning The Politics of Public Housing: Black Women’s Struggles against Urban Inequality (2004) and Concrete Demands: The Search for Black Power in the 20th Century (2015). She is the author of numerous articles and essays, including the forthcoming book chapter titled “Women, Gender, Race, and the Welfare State” in The Oxford Handbook for Women’s and Gender History, co-edited by Lisa Materson and Ellen Hartigan-O’Connor. Williams is also the co-editor of the book series Justice, Power, and Politics at the University of North Carolina Press and is co-editor of Teaching the American Civil Rights Movement. At present, Williams is researching illicit narcotics economies in the post-1930s United States and continues to examine the history of Black power politics in the United States.

Dr. Williams joined the faculty of Vanderbilt University from Case Western Reserve University in Cleveland where she was faculty in the history department, established and directed the Postdoctoral Fellowship in African American Studies, and founded and directed the university-wide Social Justice Institute. Known by many as “Dr. Rhonda,” Williams engaged in numerous community efforts as a resident of Cleveland, including on police and criminal justice reform as a member of the Collaborative for a Safe, Fair, and Just Cleveland, the “Cleveland 8,” and a Co-Chair and Commissioner on the Cleveland Community Police Commission, which was empaneled in September 2015. She has appeared on MSNBC and Democracy Now!, and is from Baltimore.

Saturday, September 25
12:30-1:45 pm
Closing Keynote
Dr. Carlotta Walls LaNier stepped into history in September 1957, when at age 14 she became the youngest of nine students chosen to integrate Little Rock Central High School. The students became known around the world as the Little Rock Nine, and with great courage and determination, they changed the face of American education forever. After Arkansas Gov. Orval Faubus closed Little Rock’s high schools the next school year to avoid further integration, Carlotta was forced to sit out her junior year and take correspondence courses. But she was one of the two members of the original nine who returned to Central in 1959. On May 20, 1960, she became the first African American girl to participate in a graduation ceremony at Central; others received their degree via mail when Faubus closed the schools, or graduated from out-of-state high schools.

Carlotta attended Michigan State University for two years and then moved to Denver and her family followed a year later. She continued her education there and in 1968 graduated from Colorado State College, now the University of Northern Colorado, where she once sat on the Board of Trustees. The same year, she married Ira C. “Ike” Lanier. She began her career in the nonprofit sector, working for the YWCA as a program administrator and founded her own real estate brokerage firm, Lanier and Company, in 1977.

Among the many awards she has received are the Congressional Gold Medal of Honor, which President Bill Clinton presented to each member of the Little Rock Nine, and five honorary doctorate degrees, the Spingarn Medal, Pierre Marquette Award, and the Abraham Lincoln Presidential Award. She has two children, Whitney and Brooke, two grandchildren, and lives in Denver, Colorado, with her husband, Ira. She authored her memoir, A Mighty Long Way: My Journey To Justice At Little Rock Central High School, in 2009.

For more information about the 2021 AASLH/AMA Annual Meeting, visit aaslh.org/annualmeeting/2021annualmeeting.