A Call for Volunteers to Research and Write Biographical Sketches of Woman Suffrage Activists: Round Two

A Call for Volunteers to Research and Write Biographical Sketches of Woman Suffrage Activists: Round Two 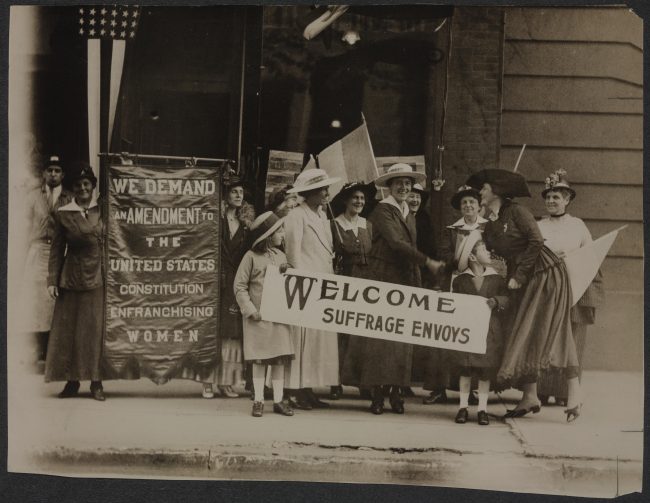 Suffrage envoys from San Francisco greeted in New Jersey on their way to present a petition to Congress, 1915.

Calling all researchers and women’s history enthusiasts! This is a second call for volunteers for our crowdsourcing project.

For two years now, Women and Social Movements in the United States (WASM), has been soliciting volunteers to create an Online Biographical Dictionary of the Woman Suffrage Movement in the United States. In that time, our population of suffragists has grown to 3,400 activists.  We have secured sketches or lined up volunteers for more than half of these activists. The database will include white and black suffragists, and both mainstream and radical suffragists. Contributors will receive author credit as the work is published online and we expect to post two versions of the resource. The first will be freely accessible and will consist entirely of the bio sketches of suffragists. The sketches will also be part of our ongoing online journal and database, Women and Social Movements in the United States, 1600-2000. More than 400 academic libraries in the U.S. and internationally are subscribers.

We are particularly eager for additional volunteers to join in the project. We are looking for volunteers to write one or two bio sketches over the next six months and thus contribute to the construction of this new reference tool. We could also use volunteers offering to copy edit sketches. If you can think of other ways to contribute to the project, please get in touch. As WASM co-editor, I am coordinating the work of the project and can either share activists’ names with you or will put you in touch with a state coordinator who can do so. If you are particularly interested in working on suffragists from a particular state, we will try to accommodate your preference.  Please email tdublin@binghamton.edu to indicate your interest and we’ll be in touch promptly,

Thanks for considering the possibility.