Bring Out Your Dead

Bring Out Your Dead

With the coming of the New Year I have been reflecting a lot on…death…that’s right – death.

In historic houses we will relate WHEN and even HOW the residents of our abodes died, but not actually interpret or do programs about death and dying. Surely the popularity of the Walking Dead and the True Blood series have shown us that people are morbid at heart and love a good death scene.

Nationwide, many historic entities have started cemetery tours to capitalize on the fascination with historic mortality. Among these are the Death & Dying Tour presented by Historic Bethlehem, Pennsylvania, where attendees view a cooling board, and the Haints & Saints Tour (yes, that’s what it is called) presented by the Crawford Long Museum in Jefferson, Georgia (Long was a 19th century doctor experimenting with anesthesia, so he may have contributed to the tour).  But few are willing to wade further into the morass of death and dying.  Enter the Isaiah Davenport House in Savannah, Georgia. 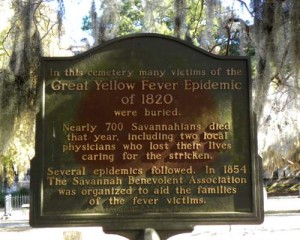 Travel Channel’s Ghost Adventures show); this comes from a well-known factoid that every time the city expanded they removed the headstones and built right over top of whatever cemetery happened to be in the way.  Many of the deceased, now residing under parking lots and brew pubs, fell victim to the  myriad outbreaks of such vile diseases as cholera, typhoid, malaria, and yellow fever.  More than 700 people died of yellow fever in 1820, and slightly more than 1,000 perished in each of the 1854 and 1876 outbreaks. Opinions on the cause of the epidemics varied, with some blaming the region’s swampy climate and unsanitary conditions, while others viewed the ships and sailors as transporters of the disease.

The Davenport House takes on the controversy and annually recreates the 1820 epidemic. Sounds like a blast, doesn’t it?! 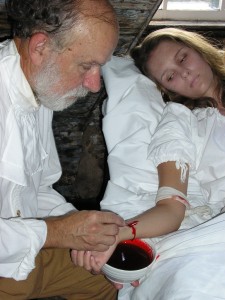 Without question, this is one of the more inventive programs I have attended at a historic house.  The Dreadful Pestilence is the only true living history program at the Isaiah Davenport House.  Actors portray victims, nursemaids, doctors, and the frothing newspapermen arguing about the origin of the pestilence.  At the end of the tour visitors participate in a Lottery of Life & Death to see if they would have survived the epidemic.  Did I mention this is all done at night?

Should you find yourself in Savannah in October be sure to make reservations in advance – people are dying to attend. http://www.davenporthousemuseum.org/