I just read a brilliant post by “Museum Anarchist” Frank Vagnone on his blog, Twisted Preservation. I hope he doesn’t mind that I riff on it in this post.

Vagnone’s post describes the ways that visitors “fingerprint” their presence at historic sites, by taking (and posting) selfies in the museum, for instance. Fingerprinting, Frank argues (and I agree) allows visitors to engage with a site on a personal level, and to leave “a bit of ourselves behind.” Other ways that visitors might fingerprint a site include spending time in a contemplative space, or through fund-raising programs that permit patrons to inscribe parts of a building.  http://twistedpreservation.com/2014/09/21/fingerprinting-a-defense-of-leaving-your-mark/ 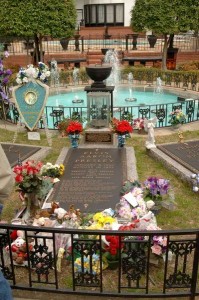 In his insightful book, From the Holy Land to Graceland: Sacred People, Places and Things in Our Lives (AAM Press, 2012), Gary Vikan describes the ways that pilgrims fingerprinted holy sites by leaving votives. Derived from the Latin Votum—meaning a vow or promise made to a deity—votives served as records of a pilgrim’s visit, expressions of perpetual devotion, and symbols of gratitude for the deity’s blessings.

At holy shrines, this practice goes back thousands of years. At Elvis Presley’s Graceland, the practice goes back to at least to August 16, 1977, the day of Elvis’ death. It supposedly took 100 vans five hours on the day of Elvis’ funeral to remove the flowers left at Graceland. Elvis fans continue to leave votives to commemorate their Graceland pilgrimages, usually flowers, candles, and pictures, but also teddy bears, angel figurines, poems, and other writings.

Graceland has designated a fieldstone wall, about 175 yards long and six feet high as a memorial wall for Elvis pilgrims to leave handwritten messages. The wall contains as many as 10,000 of these votives at any single time, but in reality there are many times that number. The wall has become a palimpsest of faded and sometimes sandblasted writings covered by fresh sentiments.

Examples of votives abound in American culture: carpenters’ names written on the beams of houses; sandcastles at the beach; lovers’ initials carved into trees; “offerings” left at the Vietnam Veterans Memorial, the site of the Boston Marathon bombings, and at roadside shrines to accident victims.

What do we want visitors to leave behind at our historic house museums? I can already hear people answering, “Money!” (The gift shop at Graceland sells the very things that pilgrims leave behind as votives.) There’s a bar in the Florida Keys where dollar bills inscribed with personal messages are stapled by patrons to almost every surface. We want people to give us their time, energy, and—yes—their devotion too.

I’d love to hear other ideas. Do you ask, or allow, your visitors to leave something behind? In what ways do they fingerprint their presence at your site? What votives would you like visitors to leave? Respond in the comments below.