Getting Schooled in History Relevance by Hamilton

Getting Schooled in History Relevance by Hamilton 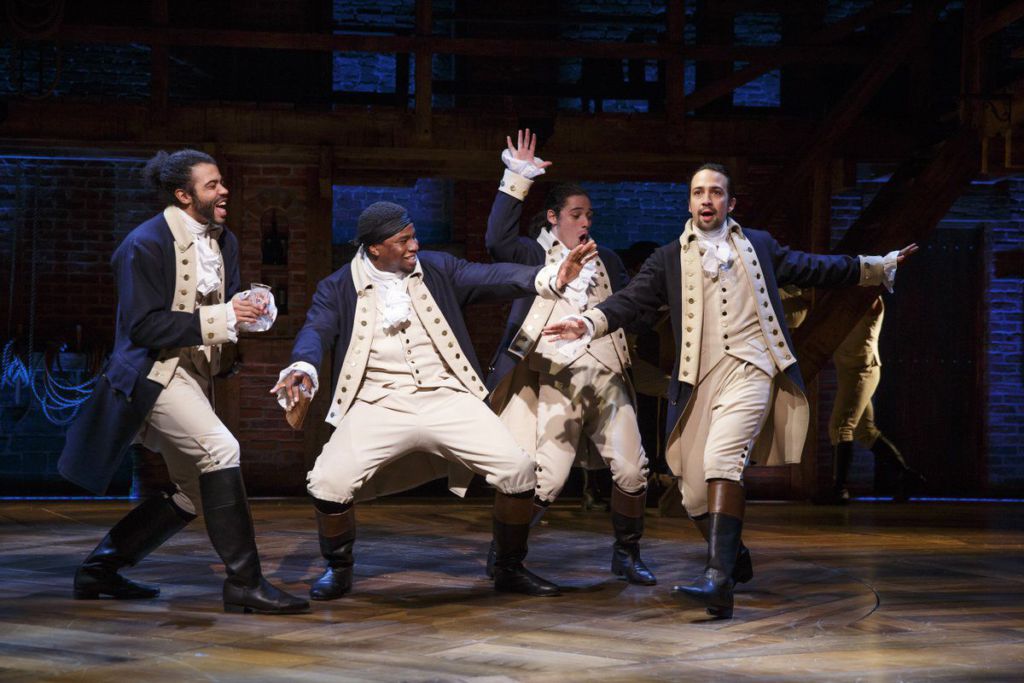 I am really late to the party. I just listened to the Hamilton: An American Musical for the first time last week. As a history geek AND a theatre geek, I snootily assumed (wrongly) that this musical by Lin-Manuel Miranda couldn’t possibly live up to the incredible hype it has received over the last year. I was very wrong as most of my Facebook friends would have told me if I had admitted on social media that I had not yet listened to this Pulitzer Prize-winning drama.

Hamilton: An American Musical is a case study in making history relevant to all people. Some historians have questioned the “race conscious casting” of the production, but most agree that the history presented in Hamilton is pretty good (although some called it fanfic). The National Council on Public History recently published articles and reviews of the play by noted historians like Annette Gordon Reed which doesn’t happen with every musical with a historical bent. 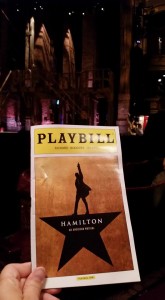 I argue that the real contribution of Hamilton to the field of history is that it takes a story about a historical figure that no one really cared about any more and made him a rock star by making history relevant to today’s world. The History Relevance Campaign states that one of the Values of History is identity. The Value of History statement reads, “History nurtures personal identity in an intercultural world. History enables people to discover their own place in the stories of their families, communities, and nation.” Hamilton is a textbook example of this value.

As I listened to the soundtrack in its entirety for the eighteenth time (at least), I was struck with some lessons in making history relevant that this Broadway smash could offer to those of us who engage the public on a regular basis in our museums, historic sites, and other history organizations.

Do Your Research – Miranda makes masterful use of primary sources in his lyrics. He intertwines historical words with music and modern lyrics offering a new way of looking at late 18th-century documents. It also makes the history of the play ring true by adding authenticity to the story. Have you read the primary sources related to your interpretation lately? If not, give it a try as you might find something new that can add a new perspective to your story. Also, make time to do new research. Historians at history organizations don’t often have the luxury of doing historical research (which is why we went into the field in the first place). Carve out some time to return to your “first love” and get back into the library/archives/Internet to find some new stories or gain a new perspective for your interpretation.

Connect Your Audience to Their History – Is there a story in your historic site or history museum that people can connect to the present? Most people would probably say no. The Uncatalogued Museum published a blog post several years ago called “What Makes Historic House Tours So Boring.” One historic site director interviewed for that blog described a major barrier to the typical house tour as “Lack of any redeeming connection to the present individual HHM visitor–almost every house tour I’ve ever been on is structured like this: A) this is the home of Wealthy McMillionare who was so gracious as to have left us his home as a museum, or his home was rescued from destruction by a patriotic women’s organization. B) Here is his sideboard, bed, fancy china, chamber pot, fireplace, etc. C) “back then” everything was different D) Thank you for visiting.”

How can we connect individuals to their history using our stories? Miranda connected to the story of Alexander Hamilton while reading Ron Chernow’s biography (while on a beach vacation) because he connected to the story of an immigrant who came to New York and rose up out of his circumstances. Miranda is of Puerto Rican descent and grew up in the Washington Heights in New York City, whereas, Hamilton was an immigrant from the Caribbean who moved to New York and made a name for himself. This connection led him to want to share Hamilton’s story. 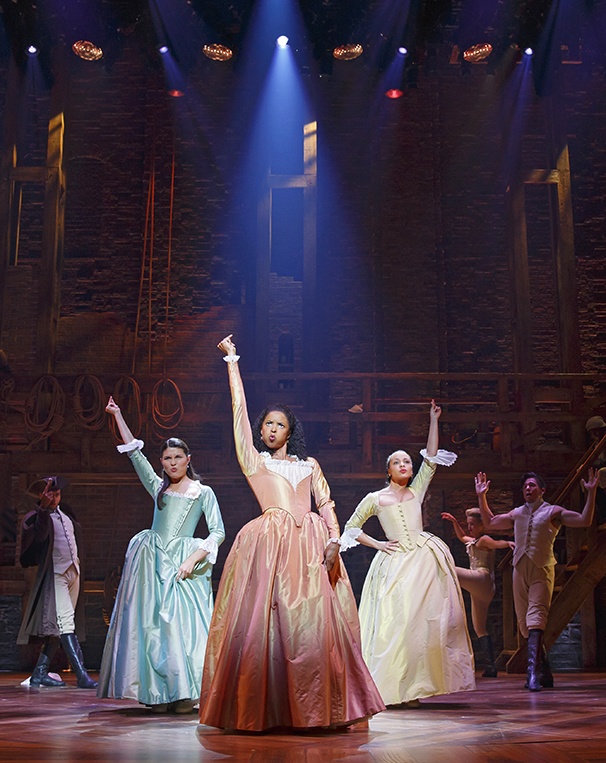 What stories can we tell at our sites that will connect our stories with new audiences? Like Hamilton, is there an immigration story? One story at the historic site I worked at before AASLH that connected to many people was that of stepfamilies. I enjoyed seeing children connecting to the story of a blended family from the 19th century. It was not the main narrative of the site, but maybe it should have been if we wanted to truly connect the young kids on a field trip to the past.

Don’t Ignore the Dirty Laundry – This is one of my favorite aspects of Hamilton. Who doesn’t like a good scandal? Airing the dirty laundry helps combat the great white man narrative by taking the great man off his pedestal. It humanizes historical figures that may be larger than life. Let’s face it . . . the dirt may be the only thing that people can connect with in this era of The Real Housewives and The Bachelor. Historical figures are not perfect. Hamilton is cocky, a womanizer, and an impulsive hot head. All of the sides of Hamilton come across in the musical creating a more complete picture of a man rather than a series of dry facts which often become the basis for our historic interpretation, i.e. born in 1755, first Secretary of Treasury, on the $10 bill.

Talk to People in their Own Language – How many of you give tours or write exhibit labels in “historian speak?” While we do have standards for writing as historians, maybe we should think about our audience when developing specific tours or programs. Miranda uses hip hop style interspersed with late 18th-century language to tell Hamilton’s story connecting people who would never read history to the story of a founding father. The history is not dumbed down at all, but is made more accessible through the use of familiar language. Let’s face it. We can’t all suddenly start rapping our tours (although if you try, please send me a video). We can ask ourselves, however, if our tours need to be less of a historical lecture and more of a conversation based on where our visitor is coming from, not what we want to tell them? 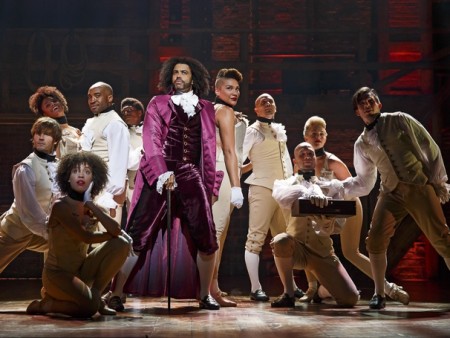 History is Emotional. – If you listened to Hamilton and say you did not experience powerful emotions you are lying or have a cold, dead heart. Miranda takes the narrative of this one man and builds to an emotional climax creating a lasting impression to his listeners (or viewers if you got to see the play). What is the emotional key to your story? Is it a grieving mother or a family torn apart by slavery? Is it an economic disaster, the destruction of a historic community by progress, or some other major change experienced by the people who lived their lives in your historic house or town? How can we turn a series of cold facts into an emotional tune that will resonate with our visitors? If this is not your forte, consider some training in storytelling. AASLH recommends some resources that can help you develop this skill.

Building a narrative that has an emotional core can help tie all of these lessons in making history relevant together. By using original research we can connect audiences to their history through powerful stories told in an accessible way. Hamilton has become a national phenomenon because to works on many levels to help people connect their lives to the past. How can you use these ideas at your site to make history more relevant in our society?

Bethany L. Hawkins is the Chief of Operations for AASLH. She can be reached at hawkins@aaslh.org.