Hindu Temples in the United States

Hindu Temples in the United States 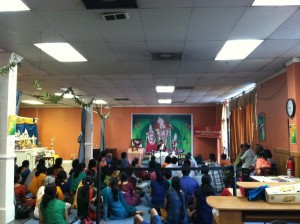 Hindu temples have marked sacred spaces for millennia in India. However, recent research documents over 200 of these structures within the United States.[i] Many of these 200 buildings have been erected within the last thirty years, and many have escaped the attention of local historians. These spaces, like those within other religious contexts, are places where practitioners approach the divine. They are spaces where the spiritual, or divine, realm and the earthly realm meet.

Much has been written on traditional Hindu temples in India, but those in the United States differ in several ways[ii]: 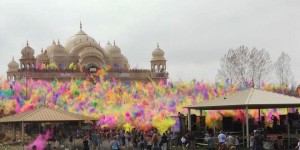 First, some temples make use of existing buildings, which lowers the cost of starting up a new temple. However, using an existing building allows for less flexibility in design and ornamentation. The Hanuman Mandir in Alpharetta, Georgia (about 25 miles north of Atlanta) occupies storefront space in a local strip mall.[iii]  The Hanuman Mandir is quite austere, with only colorful paint and curtains ornamenting the space. 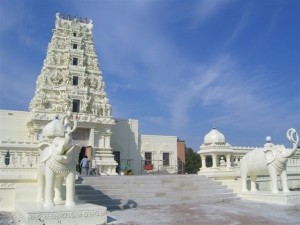 Second, many Hindu temples in the United States function as community centers with sacred space incorporated into the center. Not only are these temples built to bring together the local Hindus, but they also provide spaces for the community at large to gather together. The by-laws of the Hindu Temple and Community Center of Iowa (about 30 miles outside Des Moines) state that any person may become a member of the temple – regardless of “caste, color, creed, race or any national origin.”[iv] The Sri Sri Radha Temple is located in a small, historically farming town in Utah. However, each spring the temple plays host to thousands who gather to celebrate the Festival of Colors (called Holi).[v] This temple reaches across denominations to bring the community together.

Third, Hindu temples in the United States – especially in remote areas – are places where members of a given larger community come to learn about Hinduism. Like the Sri Sri Radha temple, many others offer classes and community outreach programs to educate members of their communities at large. Many temples offer yoga classes, operate retail stores, and open worship services with their community meals to the general public.

Based on their use, Hindu temples in the United States are having an impact on their communities. Many people attend worship services, classes or festival celebrations at these sacred sites. It is important for us to understand these sites as we seek to document and preserve the sacred landscape of America.

[i] For an informal list, see: http://en.wikipedia.org/wiki/List_of_Hindu_temples_in_the_United_States, accessed 13 December 2013.