In 1902, notorious outlaw Harry Tracy held the Johnson family hostage at their isolated farm near Auburn, Washington, while the patriarch was sent to Tacoma to fetch guns for Tracy’s ill-fated flight from prison. Now open to the public, the site of that hostage-taking is the preserved Mary Olson Farm, nestled in a natural amphitheater and visually isolated from the modern world. At first glance, visitors to the farm would never suspect that such a dastardly criminal as Tracy had ever disturbed this tranquil, bucolic setting….that is, unless they witnessed “Gentleman Desperado,” an interactive dramatic presentation of Tracy’s run from the law and his threatening encounter with the family. 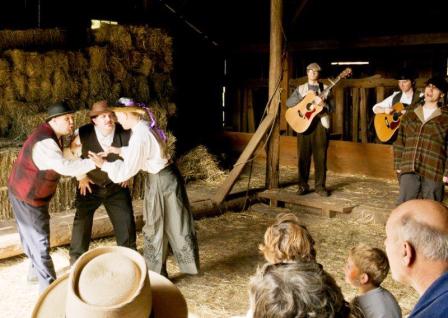 Written and directed by Keri Healey, “Gentleman Desperado” is just one of many original works resulting from collaborations between historic sites and creative partners supported by Historic Site(s) Specific, an innovative program from 4Culture, King County, Washington’s cultural services agency. This partnership matches heritage destinations with artists, playwrights, film makers, and others from the creative community. Combining arts, heritage and historic sites is a natural fit, advancing the commonality of storytelling.

4Culture’s Historic Site(s) Specific funds projects to enhance, reinterpret, and draw new audiences to culturally significant sites. Audiences aren’t the only ones who benefit. The program also stretches the thinking of both site stewards and creative partners. The artists developing this public programming bring new and innovative ways to transcend the limitations imposed by time and space.

Eric Taylor serves as lead staff for Heritage 4Culture, managing five funding programs, and coordinating department initiatives, partnerships, and field services. Eric began his museum career in Montana in 1975, moving to Washington four years later, when he joined the staff of the Whatcom Museum of History and Art. Relocating to Seattle in 1983, he opened a museum consulting firm, serving a clientele of primarily community-based heritage organizations in King County and statewide. He currently sits on the Washington Museum Association board and actively participates with heritage groups nationally, regionally and locally. Eric holds a degree in Museum Exhibit Design from Western Washington University and a Certificate in Genealogy and Family History from the University of Washington.

4Culture – Operating as a cultural development authority since 2002, 4Culture is a unique combination of public art, arts, heritage and historic preservation under one roof. Serving all of King County, Washington, the agency provides financial support to individuals and organizations for projects, operating costs, buildings and equipment. In addition, 4Culture-generated initiatives have encourages creative expression through commemorative events, heritage tourism, cultural gatherings, historical performance, and the Site Specific program.