How can you install an interactive display without it taking away from the exhibition?  After all, it’s about the content, not the equipment. We wanted to incorporate each kiosk into an exhibition to heighten mood and focus on the content simultaneously.

You certainly don’t have to create an elaborate display to install an interactive tablet. Many companies sell tablet display cases to use as a kiosk. The most durable, child-proof cases run between $200 and $600. We decided against them for two reasons: they didn’t fit with the museum’s floor plan, and we couldn’t afford them.

So we had to get creative. 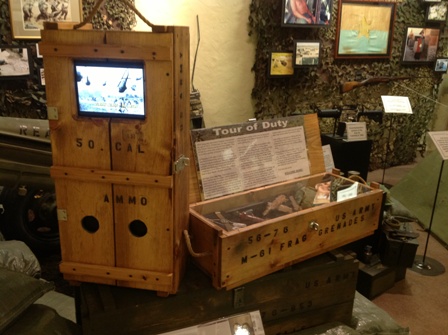 We began once again with the content. What would enhance the mood of each exhibition? For an exhibit on the Vietnam War, we built a display case modeled after ammunition boxes used during that period. Our Korean War exhibit had a tablet built into a Korean garden gate. For our Cold War display, a control panel stands next to our W-48 Artillery Fired Atomic Projectile. We wanted the interactive tablet cases to enhance the exhibition by blending in – not competing with – the exhibit.

Again, stick with what you know. We could have used metal, but some team members are talented woodworkers, so we made our cases out of that instead.

Make sure visitors can interact with the screen without operating the control buttons, other than to exit the kiosk app. 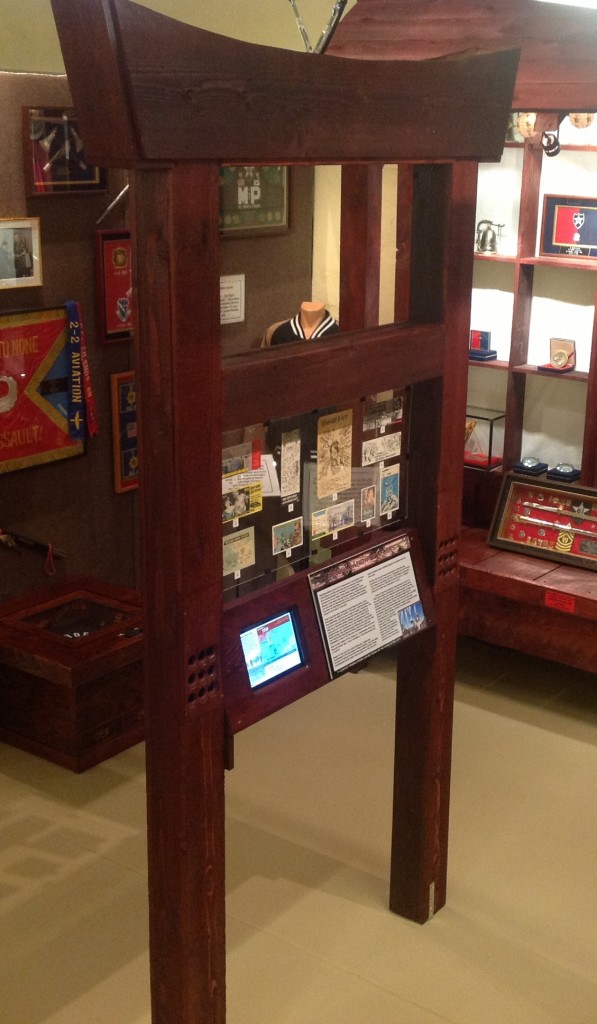 Tablet built into a Korean garden gate at the Gen. Tommy Franks Museum

If your display has a video or audio component, what kind of speaker system will you use? For us, the best system is also the cheapest. We install $15 Logitech computer speakers with a built-in amplifier. They plug directly into the tablet’s headphone jack. You can also use more elaborate speaker systems or even headphones; a word of caution, though: some visitors may object to using headphones for hygienic reasons, leading to reduced audience participation.

If we notice a visitor avoiding the kiosk, a docent strikes up a conversation and walks them through the content. This makes them more likely to use other kiosks throughout the museum.

As we’ve said throughout this series, an exhibit is only as good as its content. Interactive displays should enhance, not overwhelm, the experience. Stick to what you know about your audience and about your museum’s content, and you’ll develop a kiosk system that enhances your museum.

Warren Martin, Executive Director of the General Tommy Franks Leadership Institute and Museum, is the primary presenter of all Inspired Leadership Experiences. Warren has been leading leadership workshops, presenting keynote presentations and consulting with Fortune 500 corporations for 16 years. A Philosophy graduate from Texas Tech and author of 5 books, Warren is known for his unique teaching style. He has worked in 28 countries around the world (mostly in the Middle East and Latin America). He has also worked with teachers, organizations, and youth ministers to develop curriculum and need specific training. Warren has been listed among the top 400 speakers in America. His passion is to invest in the lives of others through servant leadership to assist them in reaching their full potential. Read Part I and Part II of this series to understand Warren’s approach to kiosks.