Confederacy in the Commons: Addressing Controversy on the Monument Avenue Walking Tour

Confederacy in the Commons: Addressing Controversy on the Monument Avenue Walking Tour 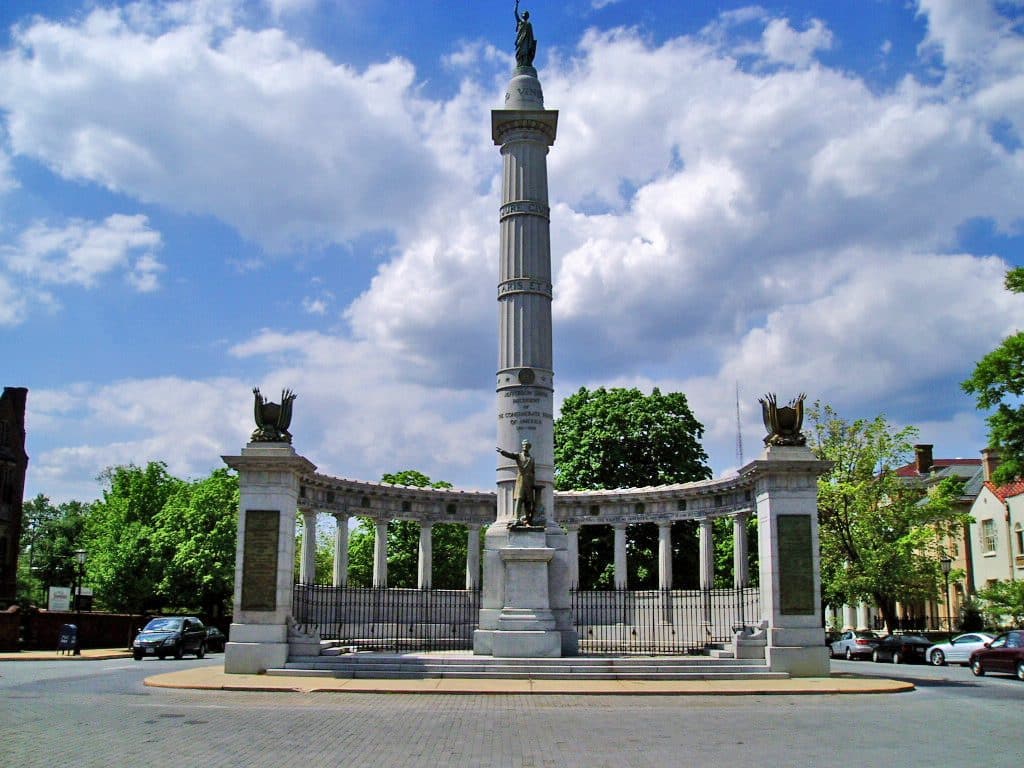 Despite being a relatively new organization, the Clio Foundation has already made a significant impact on the field of public history. Through its website and free mobile app, Clio is reshaping how we interact with history in the digital age. Combining historic research, GPS technology, and open-source publishing, the sheer innovation of this digital platform creates a direct connection between the specific location of the user and a free database of scholarly information. (Think of the platform as a union of Google Maps and a scholarly, more reputable Wikipedia.) Each entry within Clio’s database offers the ability to host a unique blend of written accounts, images, books, maps, audio, video, and other pertinent types of information sources, all connected to the specific geographic location of that historic site. Geared to be collaborative in nature, the platform welcomes the input of multiple authors in an effort to create more inclusive narratives of our past while actively documenting changing interpretations. Utilized by everyone from volunteers of small local historical societies to university professors and National Park Service professionals, Clio allows a variety of historians to engage with broader audiences across the country. To date, there are over 33,000 individual entries and over 570 walking/driving tours in the Clio database. 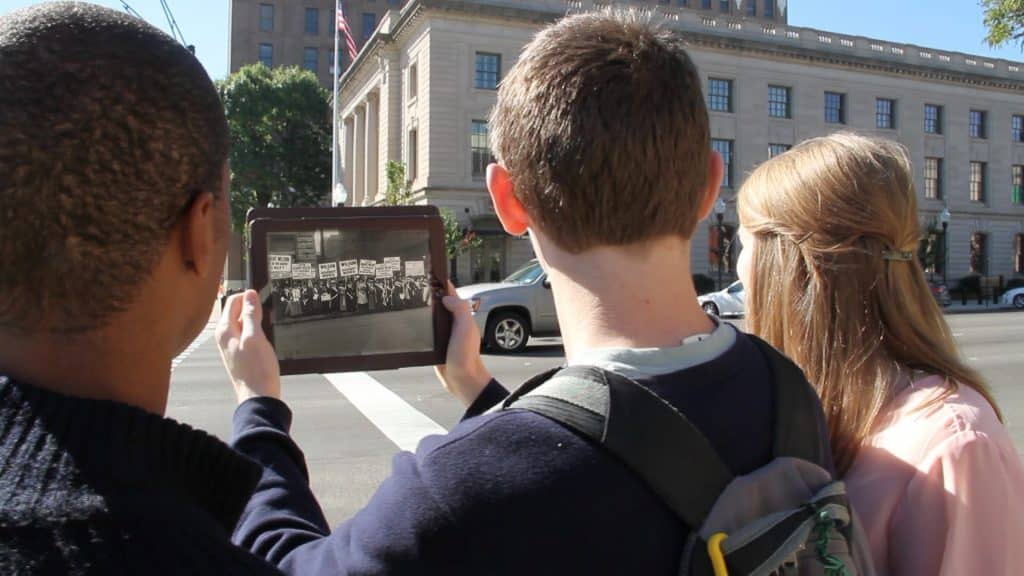 One of Clio’s most recently launched walking tours demonstrates the value of such an intersectional platform. Located in Richmond, Virginia, the Monument Avenue Walking Tour provides users with a more comprehensive look into the city’s controversial boulevard of mostly Confederate monuments. Dr. Lindsey Bestebreurtje, of George Mason University and the Smithsonian Institution’s National Museum of African American History and Culture, described the history of Confederate memorialization in the Southern states as “an attempt to regain control of Southern society. Legal and political changes, overt violence and Klan activity, and Confederate monuments comprised a tangible threat to African American citizen’s lives and livelihoods. The monuments asserted dominance of social and public spaces as whites only zones, even in areas that may not be codified as segregated in the Jim Crow South.”

Beginning with the J.E.B. Stuart monument, the Monument Avenue Walking Tour moves west down Monument Avenue and stops at the memorials for Robert E. Lee, Jefferson Davis, Stonewall Jackson, Matthew Fontaine Maury, and African American tennis star Arthur Ashe – the avenue’s most recent monument. Each of the individual Clio entries in this tour provide a Google Street View image and map of the monument location, a detailed account of the individual’s career and memorialization efforts, discussion of the controversy surrounding the monument, and an explanation of public engagement measures initiated by the City of Richmond to better understand the social impact of the monuments for future reinterpretation. As explained by Dr. Bestebreurtje, “the Monument Avenue Walking Tour provides vital context to the issue of Confederate memorialization and the concerted effort by Virginians to construct a false history around the Civil War’s causes and consequences. The construction of these monuments shows the social arm of the “Lost Cause” movement which played out in Virginia politics at the same time.” 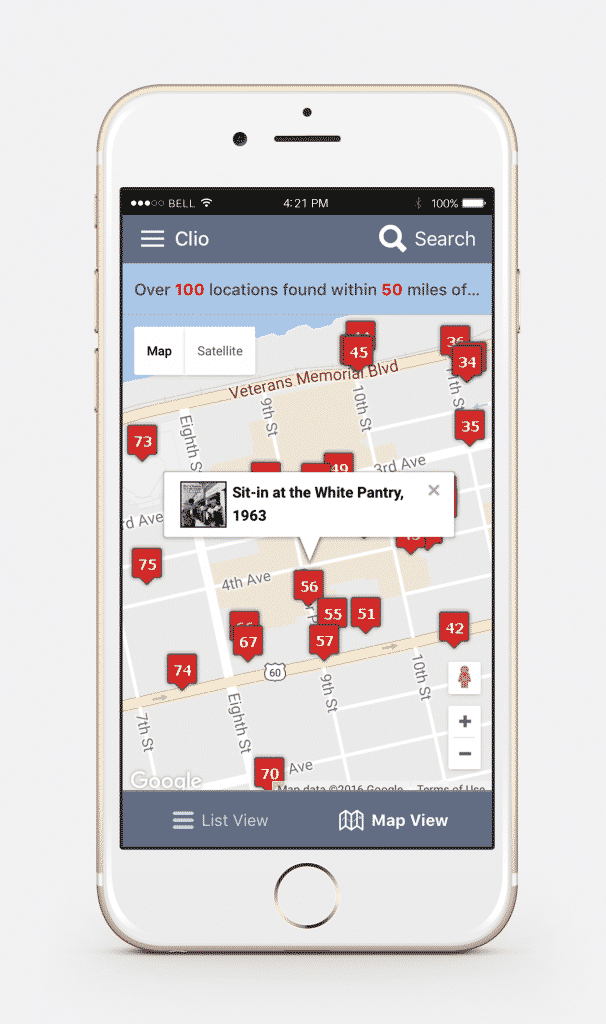 Users can access Clio maps and tours on their smartphones.

At such a pivotal moment in American history as we are in now, with shifting attitudes regarding the existence of Confederate memorials on municipal property, providing free scholarly information is an essential contribution to the evolution of public opinion about such complex historic sites. “Sites like the Monument Avenue Walking Tour,” continued Dr. Bestebreurtje, “educate the public about these issues and highlight how monuments were not created in a vacuum, how their social meanings go well beyond mere military commemoration, shedding light on the tangible ramifications of what is preserved in our society so that we may critically analyze who we would like to celebrate and what that communicates to members of the community.” Clio and the Monument Avenue Walking Tour also found support from the Virginia Department of Historic Resources. Lena McDonald, Historian for the Register Program, Survey & Register Division for the DHR spoke on behalf of the department, echoing Dr. Bestebreurtje’s emphasis on the public impact of the tour: “The Department of Historic Resources supports public history initiatives such as Clio’s as an important means of public engagement and education about how historic events continue to inform current civic discourse.” Clio’s Monument Avenue Walking Tour can serve as a useful model for historians to create and share more comprehensive interpretations of similar controversial sites.