Mystic Seaport is seeking applicants now through February 18 to become a stowaway aboard the Charles W. Morgan during her 38th Voyage in the summer of 2014. To apply and submit your video entry, visit www.mysticseaport.org/stowaway.

Following a $7.5 million, multi-year restoration, the Charles W. Morgan will embark on a voyage throughout New England for the first time in more than 80 years. The stowaway will sail aboard the Morgan, America’s oldest surviving merchant vessel, during her three-month voyage commemorating America’s maritime heritage.

“This is for someone with a sense of adventure,” said Susan Funk, executive vice president of Mystic Seaport. “The word stowaway brings to mind a romantic image. To take a chance. To not know what you’re getting into until you’re already in it, and to go to places you’ve never been before, or go to places you’ve been, but seeing them in a whole different perspective.”

While on the 38th Voyage from May to August, the Charles W. Morgan will stop at historic ports of call throughout New England including visits to New London, Conn.; Newport, R.I.; and Vineyard Haven, New Bedford, and Boston, Mass., where she’ll dock next to the USS Constitution. She will also anchor off the coast of Provincetown, Mass. for day sails to the Stellwagen Bank National Marine Sanctuary, where the Morgan will team up with the National Oceanic and Atmospheric Administration (NOAA) to observe whales in their natural environment.

The stowaway will watch, inquire, learn, participate, and use their creative energy to share the voyage experience with the general public through blogging, videos, social media, and activities in the port cities. The stowaway must be 21 years or older. Prior sailing experience is not required, but curiosity and enthusiasm are a must.

The stowaway will be immersed in all aspects of the Charles W. Morgan’s 38th Voyage while living on board the ship with the crew. The stowaway will learn and take on any jobs associated with living and working on a 19th-century vessel including handling the sails and lines, steering the ship, and scrubbing the decks. The stowaway will be a key player during events and exhibits at each port of call with an opportunity to explore and meet new and interesting people. The stowaway will receive compensation in the form of a stipend for their work.

“This is a unique opportunity, a moment in time that won’t come around again,” said Funk, who is also the president of the board of directors of the New England Museum Association. “This person will go into record as the stowaway on board this voyage. This is going to be the Morgan’smost documented voyage ever.” 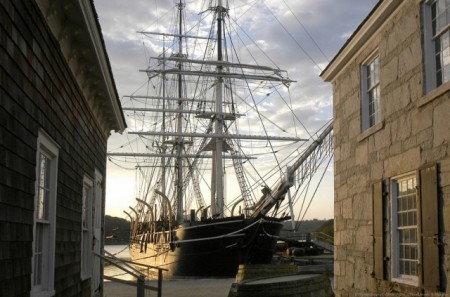 Mystic Seaport is the nation’s leading maritime museum. Founded in 1929, the Museum is home to four National Historic Landmark vessels, including the Charles W. Morgan, America’s oldest commercial ship and the last wooden whaleship in the world. The museum is located one mile south of Exit 90 off I-95 in Mystic, CT. Admission is $24 for adults and $15 for children ages 6-17. Museum members and children 5 and under are admitted free. For more information, please visit www.mysticseaport.org.