Notes to Self or When to Stay Up Late at Conferences

Notes to Self or When to Stay Up Late at Conferences

AASLH conference time is almost here!  Last year was such a great conference, and I even wrote a few notes to myself to help remember a few key things. And perhaps they might help you. Annual conferences give you just enough time to forget a few things (I may have said yes to a second session. Sorta.)  And I won’t know until I get to Detroit if I remembered to pack the SHA pin. Here’s what I wrote last year. -Melissa Prycer

Just returned from Louisville, where I was attending the annual meeting of the American Association for State and Local History.  And before I get back involved with the day to day of running Dallas Heritage Village, here are a few notes to myself I’d like to make for next year’s conference in Detroit.

The SHA 2013 Class was well represented in 2015–and this isn’t even everyone who came!

And here are a few things that I was smart about, and that I probably shouldn’t forget for next time. 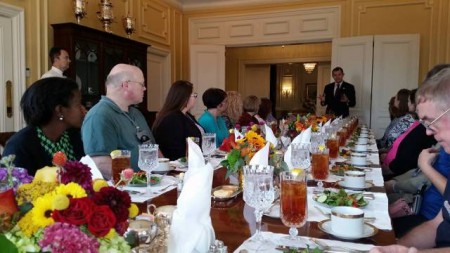 I don’t think we’re used to this level of fancy at conferences.