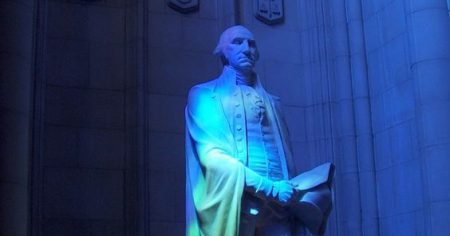 When I tell people I study religious history, the conversation frequently turns to the state of religion in the United States. People often ask how I feel about where we are in relation to our “religious roots” as a nation. Depending on the person I’m talking to, they are generally looking for my thoughts on 1) how we’ve lost track of our identity as a Christian nation or 2) how I see the legacy of conservative Christianity holding us back from “progress.” Behind these questions is an (often) implicit connection between nationhood and religion. People seem to have a general idea that the nation is a moral institution, that is to say that there is moral value to how it acts, what it represents, and what its purpose is.

In 1967, Robert N. Bellah, an internationally known scholar on religion, published an article entitled “Civil Religion in America.” In it, he argued that the United States has a civil religion that is separate from any one specific faith system. General hallmarks of the faith include the idea that there is a God (or Divine Power) to whom we are accountable for our actions and that we have a (divine) purpose to fulfill. “The American civil religion,” Bellah says, “is not the worship of the American nation but an understanding of the American experience in the light of ultimate and universal reality.” Bellah goes on to argue that American civil religion has its own saints (e.g. George Washington), martyrs (e.g. Abraham Lincoln), holy days (e.g. Memorial Day), and symbols (e.g. the flag). The National Cathedral in Washington is a prime example of American civil religious expression. I agree with Bellah’s assertions about American civil religion and I think they have significant implications for the relevance of religious history.

I am a historian that takes religion and faith seriously as a motivators. Power and money are also real (and prevalent) motivators, but I think it does a tremendous disservice to historical actors to reduce everything they do down to a quest for money or power. From what I’ve seen of humanity, people are deeply motivated by what they believe in –their faith, their religion, their moral system, their dreams and hopes for a better future. As such, I believe religion is so deeply interwoven into people and events that we must acknowledge it as a continual phenomenon. It is always around, although it may not be obvious.

If 1) the United States has a civil religion and 2) if religion plays a continual role in how people act and think, then religious historians have a responsibility to talk about the development of civil religion, how it interacts with other faith systems, and how it interacts with politics and national identity. Religious history is important because it helps to identify where one faith system (traditional religion, civil religion, or politics) ends and where another one begins. By clarifying the boundaries between these important parts of our identities, we can better see the things that influence us and can leverage them (or not) to look to the future in new ways.