The Legacy of America’s “Other” Columbus

The Legacy of America’s “Other” Columbus 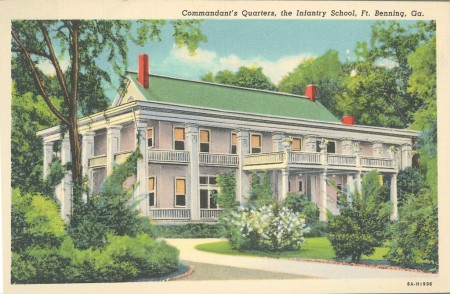 Mention “Columbus” to a group of Americans, and most will think of the Italian explorer or the capital of Ohio, not Georgia’s second-largest city. Mention “Fort Benning,” though, and there’s a good chance you’ll hear men and women telling stories about when they or their grandparents, parents, siblings, spouses, or children were stationed at one of the country’s largest Army posts, located just south of Columbus, Georgia, on the Alabama border. As part of its regional history mission, the Columbus Museum tells the story of Fort Benning since its founding in 1918 as a new home for the Infantry School, including its rapid expansion during World War II.

A 1940 map of Fort Benning shows what the post looked like just before everything changed. As you might expect, large barracks, supply buildings, tank sheds, and other “military” words fill the paper. But when you read more closely, other details emerge. Here’s a handball building, right next to the Girl Scout cabin that shares a field with the Boy Scouts. There’s the post bakery, the new and old War Department theaters, and the filling station. 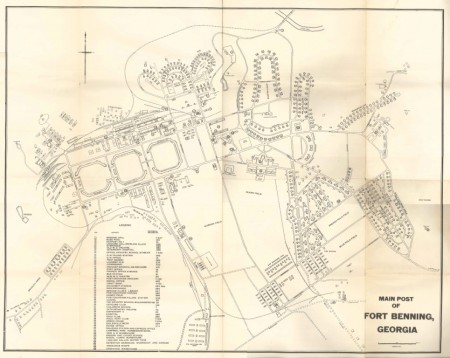 Soldiers could play games at the gymnasium, the bowling alley, or Doughboy Stadium. Gowdy Field was named for Hank Gowdy, the first major-league baseball player to enlist in World War I, years before Gowdy himself served there as chief athletic officer during World War II. Interwar-period training methods are most evident in the numerous structures related to traditional cavalry units. The veterinary hospital, the stables, the polo fields, and the Campbell King Horse Show Bowl all catered to a type of officers’ service and lifestyle that was about to become obsolete.

Both white and African-American troops lived and trained at Fort Benning, not always harmoniously as racial tensions ran high in the Jim Crow South. The 24th Infantry Regiment, an original Buffalo Soldier unit, was stationed in this relatively rural part of Georgia, living at the end of the row of barracks and close to their separate swimming pool. Cashtown, the black family housing area, lay on one side of the railroad tracks, separated from most of the post and white housing areas like Rainbow Avenue. Some black non-commissioned officers (NCOs) recalled that their housing was almost as good as white NCO housing. Still, the probable lynching of Private Felix Hall in a wooded part of the post in 1941 suggests the terror that many African-American troops faced in the Deep South, even when in uniform. 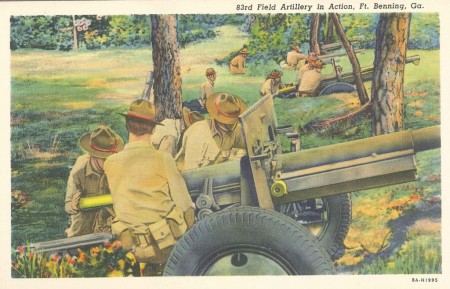 Perhaps most intriguingly, some features of the map indicate the area’s past as a site of heavy American Indian settlement and rich plantation lands. Indian Head Road leads to Lawson Field, beneath which lies the archaeological remnants of Cusseta, one of the most important Muscogee (Creek) towns of the contact period. The commandant’s quarters, known as Riverside, is actually a 1909 white-columned frame house that served as a summer home for Arthur Bussey, a Columbus businessman. After several years of growing cotton, corn, and sugarcane on the property, Bussey joined with local leaders in an effort to bring the Army to Columbus at the end of World War I, hoping to spur the economy and make a tidy profit from selling his land for the new post.

After 1940, Fort Benning changed quickly with the growth of Officer Candidate and Airborne schools, as well as the World War II building boom, and Columbus saw an influx of celebrated generals and movie-star girlfriends along with thousands of servicemen. This map, then, lets the Columbus Museum present one last clear picture of a military community on the verge of national prominence.