At the AASLH Annual Meeting in St. Paul this past September, I had the good fortune to lead a workshop on game design with David Schaller of Eduweb.  I was there merely to share trends in the field in regards to using games to teach history, and Dave helped us understand why games work as learning tools and how to build a game that meets our goals.

As I was preparing for the session, I was thinking about the effectiveness of history-based games. Granted, I was the type of 1980s kid that loved Where in the World is Carmen Sandiego on my Apple IIGS. And don’t get me started on my fascination with The Oregon Trail.

Ah ha! The Oregon Trail. It has become so iconic that it has bled into our popular culture. (I admit; I am tempted to buy the “You died of Dysentery” hipster t-shirt.)

I wanted to know WHY The Oregon Trail has become so iconic. Is it because it employs game design in a way that engages students and facilitates learning? Or is it something else. I decided to ask Mr. Google what he thought, just to see what I could find.

This was the first thing that popped up: 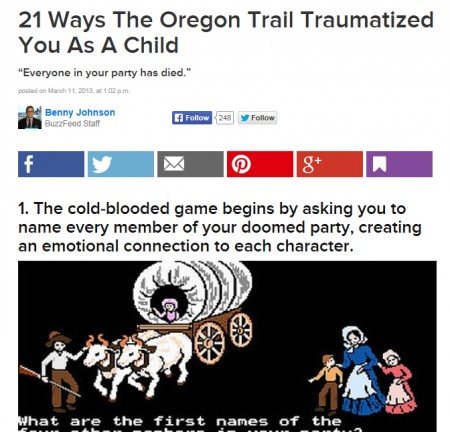 Ok, so maybe the game isn’t as memorable for the content it tried to teach, but for its “shock value.”  When I was designing our Building Detroit online game, I chose to include the possibility that children could die of cholera or from drowning in the Detroit River. Like Oregon Trail, those “accidents” were common and historically accurate.

Then I thought, “Hmmm. Is trauma a good strategy for learning?” I noticed that the jokes did put the game in its historical context. Somewhat.

And then I saw this: 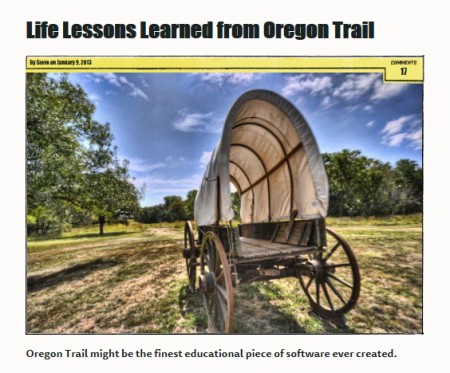 Steve Kamb, on his blog Nerd Fitness, took his learning from the game to a whole new level. In his words: “Although I might not have learned much about pioneer life back in the 1800s, I did learn a boatload (cart-full?) of things about how we can improve our lives.”

Now there’s an optimistic take on all the trauma!  But still, it’s learning through trauma.

Then I gave up the pop culture references and went the scholarly route. Here’s a quote I found from Ruth C. Clark and Richard Mayer in their book, e-learning and the Science of Instruction:

All three sources come to a similar conclusion: Learning DOES take place in The Oregon Trail, but it may not be  what the games was designed to teach: History.

Did you play The Oregon Trail as a child (or as an adult on one of the new apps)?  Where do you stand on its effectiveness as a tool to teach history? Can games effectively teach history?