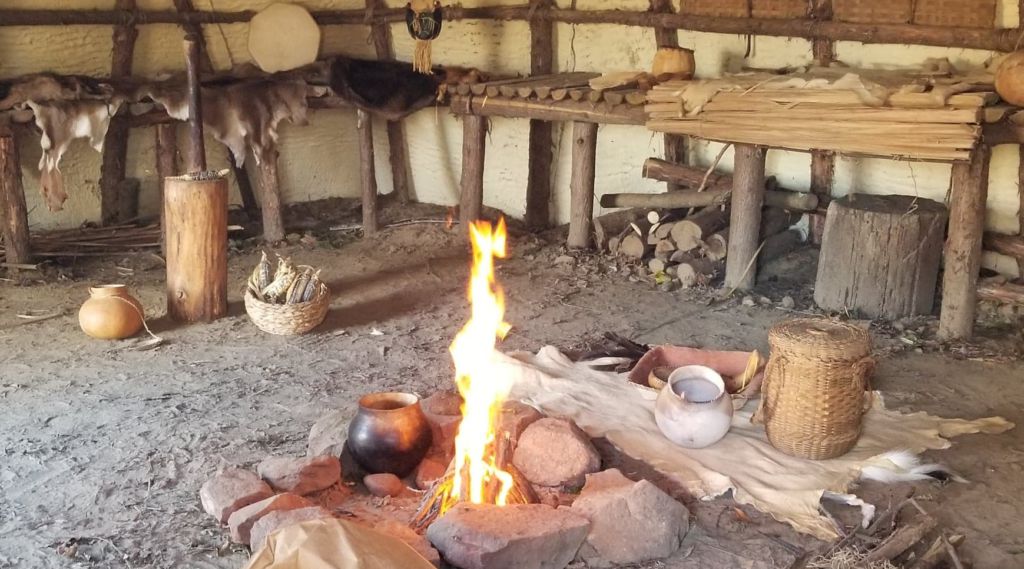 The interior furnishings of the Sachem’s House in Nowashe Village.

At this year’s Small Museums Luncheon at the AASLH Annual Conference on Thursday, September 15, at 12:30, we are excited to hear from the team at the Wood Memorial Library & Museum about their HIP (History in Progress) Award-winning Nowashe Village project. I chatted with Executive Director Carolyn Venne about Nowashe Village, how a small organization with four part-time staff accomplished so much, and how their work speaks to The Power of Place.

Julia: Tell us about Wood Memorial Library, your staffing and governance, and how you developed the idea for Nowashe Village.

Carolyn: Founded in 1971, the Friends of Wood Memorial Library & Museum is a small organization in central Connecticut that provides a historic archive, educational and cultural programming, and a small museum and lending library. We have a part-time staff of four, three of whom work with Nowashe Village, and a volunteer board of sixteen who oversee both the library and Nowashe Village. Located on historic Main Street, which was laid out on an ancient Native American thoroughfare, “The Wood” is located a stone’s throw from the palisaded Native American fort that Dutch explorer Adriaen Block “discovered” along the Connecticut River in 1614. This was the fort of the Nowaas tribal nation who called their home “Nowashe.” For decades, our organization has educated visitors about local Native American heritage, largely based on a collection of more than 20,000 local artifacts. However, the program was largely indoors. A few board members who also served as docents suggested building an outdoor space dedicated to Native American programming.

Julia: What was the timeline and budget for the Nowashe Village project? How do you fund the ongoing operations?

Carolyn: When the opportunity arose in 2015 to own an acre of land on which to build a Native American village, the board of directors applied on a whim for a $75,000 competitive state grant. The project was off to a slow start—it took more than a year for the grant to close and the required 25% matching funds to be raised. In 2017 our part-time staff took over the majority of the project’s implementation, with a board committee providing oversight.

Construction was completed in October of 2020 and ran slightly over budget, at a total of nearly $100,000, about half of our regular annual budget. More than a quarter was paid directly to Native Americans or tribal nations for materials, construction expenses, or educational supplies like pelts, woven mats, and clay pots.

Nowashe Village opened to the public in the spring of 2021. While grants remain a part of funding for both the physical operations and the hiring of Indigenous educators, earned income from field trips and other community groups has increased dramatically. Seasonal sponsorships also now play a role in funding Nowashe Village on an annual basis.

Julia: What do you think enabled a small organization like the Wood Memorial Library to accomplish this ambitious project?

Carolyn: Early on our staff understood the importance of seeking various perspectives from Native Americans and academics before making any major decisions. This inquiry process helped to inform our all-white staff of what to consider for both construction and museum operations. Along the way we became passionate about educating in ways that are appreciative of Indigenous Peoples of both the past and today. The knowledge that what we were doing was unique to the region and was consistently met with positive feedback (and of course, kind but constructive criticism) from the Indigenous community kept our morale and effort levels high. It was exciting to feel that we were zeroing in on something that was both important work and a major turning point in the future of our organization.

The Advisory Board meeting in March 2018.

Julia: How did you approach potential Indigenous partners and advisors? How did you develop collaborative relationships? Did you encounter any challenges and how did you overcome them?

Carolyn: Finding Indigenous partners is a winding and bumpy road which happens almost entirely by way of personal introduction (Facebook relationships can help for research, too!). Often new contacts are very wary of speaking with us. Some individuals have never returned repeated attempts at communication. Building a network is paramount.

Over time, I believe that we have built a positive reputation by having a deep commitment to trying to do, say, and offer the right things with our work. We always listen and consider every Indigenous person’s viewpoint with great care. We try to use the right words, never make assumptions, and humbly admit what we don’t know. We respect traditions like sharing meals, trading, gift giving (which is often intangible), and support the Indigenous economy. We respect each person’s comfort level and boundaries and know that they’re never the same. The Indigenous people we work with have strong connections to the earth, to the Creator, and to each other. We do not try to insert ourselves into that world but work to bring awareness to its beauty.

Julia: How do you make sure that visitors to Nowashe Village are learning Indigenous perspectives from Indigenous people?

Carolyn: We do not yet have Native American representation on our staff or board of directors. But that didn’t stop us from ensuring that Indigenous voices were represented in the development of Nowashe Village. Before the final budget was finalized, we welcomed a variety of Native Peoples and other subject matter experts to discuss a vision, always compensating Native People for their time and travel expenses. Today, Nowashe is never open to the public without at least one (paid) Indigenous person on site to educate. Our QR code text, handout materials, website verbiage, etc. are also reviewed by multiple sources. 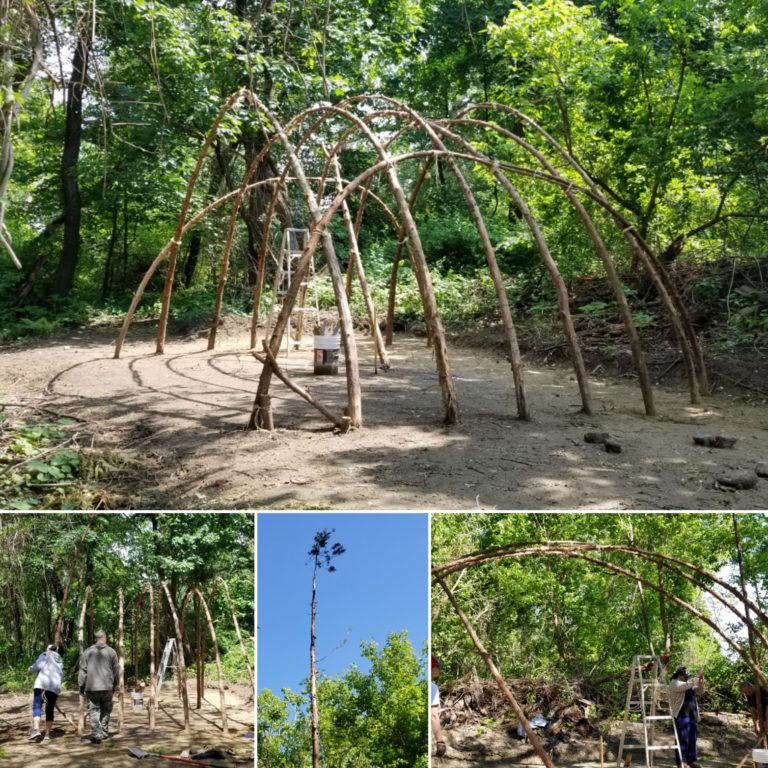 Over time it’s become clear that with so many different voices, oral history and what is “correct” can vary. Beginning next year, we are going to acknowledge each source of knowledge throughout Nowashe, i.e. “This year, the Three Sisters Garden is planted in the Mashpee Wampanoag tradition,” “The stories featured today are from the Abenaki,” etc.

Julia: What advice would you give to other small museums/history organizations based on your experience developing and operating Nowashe Village?

Carolyn: Celebrate the wins as you go, and be agile—there will be changes, setbacks, delays, huge realizations, and goals that you will not be able to accomplish. We had to apply for a grant extension and utilized our one opportunity to overhaul the project’s budget detail in 2018. In 2020 we had a huge setback, and I don’t mean the pandemic. Hurricane Isaias dropped a microburst that plowed through the middle of Nowashe Village, narrowly missing our structures but causing thousands of dollars in tree damage. Once it was cleaned up, we could only laugh and say that what used to be thick woodland now looked like Mordor from The Lord of the Rings.

If you are staff working on a big project, know that your board may not always understand your methods and probably won’t be able to keep up with timeline, budget, and vision changes. Keep them informed as much as possible to promote trust through transparency, but accept that while you’re in the trenches, you may not get a lot of positive feedback. Board members should be patient and recognize that they may not have all the necessary expertise for a large project and will need to rely on professional staff or other advisors.

Julia: When you consider the theme of this conference, how does the Nowashe Village project speak to The Power of Place? How does it tackle these questions and ideas?

“The conference theme, Right Here, Right Now: The Power of Place, suggests many questions. What place is important to you? To your community? Do you see these stories reflected in your museums, historic sites, and the local cultural sector? Who decides what places are saved or interpreted and what ends up being worth saving? Answers to these questions trace back to who is at the table when discussing memorializing an event in history or a place in time, who holds authority in decision making processes, structures of power that often go unseen or unaddressed.” — AASLH Program Committee

Carolyn: Originally, the board of directors did not have a vision beyond creating a place that would continue to be used by white docents to support our local school district. There was little thought given to making it financially self-sustaining, and there was little understanding about how to interpret the land that was once the home of the Nowaas. Our professional staff recognized that there is great responsibility in representing thousands of years of Native American history as well as the community’s modern struggles and worked with our board to reshape the project.

Nowashe Village is the epitome of The Power of Place. This hilly, wooded little acre, which once held a huge tobacco barn, is now interpreting thousands of years of history through the voices of those who matter most. Nowashe is ADA-accessible, a Certified Wildlife Habitat, and an immersive, multi-sensory space that seeks to be relevant for all interest levels, ages, and abilities.