A Crisis of Faith: Interpreting Leonard Bernstein’s Music and Religion

A Crisis of Faith: Interpreting Leonard Bernstein’s Music and Religion 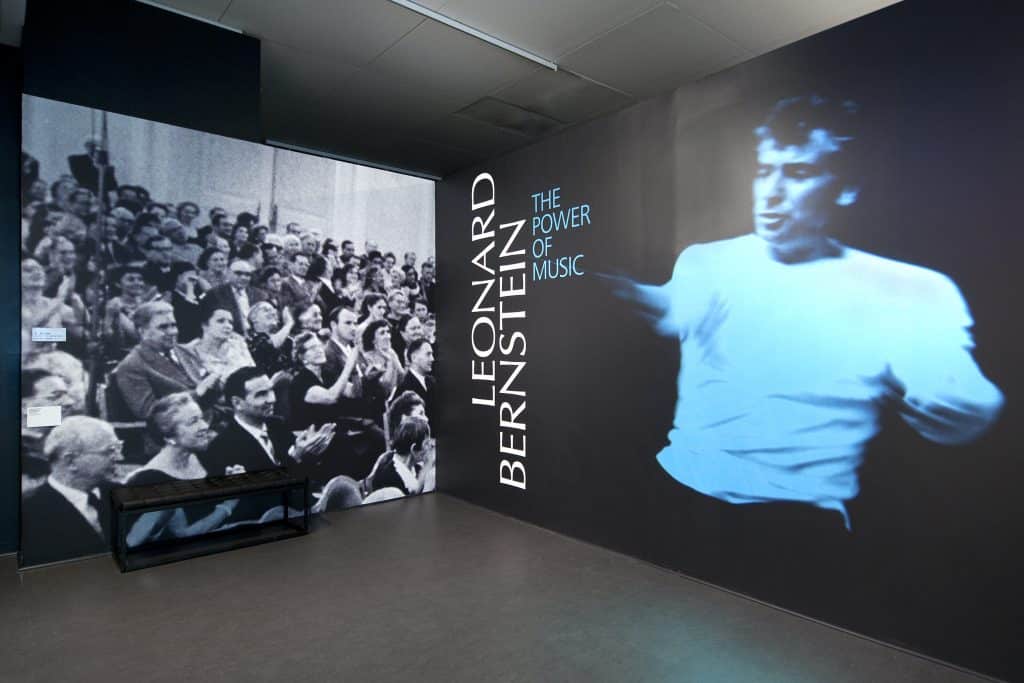 The National Museum of American Jewish History organized Leonard Bernstein: The Power of Music to commemorate the 100th anniversary of Bernstein’s birth in a way that would connect to his Jewish identity and not duplicate other events being organized to honor his musical legacy around the world. The result is a deeply spiritual and emotional exhibition that explores faith as a central theme along with music, social justice, and the continued relevance of his work today as a part of our popular culture. When I visited the exhibition in Philadelphia, I was struck by how effectively religion and spirituality were incorporated into the interpretation of one of America’s best known and revered musical icons. The exhibit is a model for how history museums can interpret religious content beyond a narrow definition of faith and religion in ways that can help audiences forge deeper and more meaningful connections to history.

The first panel in the exhibit opens with a quote from Bernstein that sets the stage: “The work I have been writing all my life is about the struggle of the crisis of our century—a crisis of faith.” In a conversation with Ivy Weingram, the museum’s associate curator and the organizer of the exhibition, I asked her how she thought Bernstein viewed this crisis of faith and how it influenced his work. Her response was that the central question for Bernstein was to ask how we can continue to believe or maintain faith in a broken world. Clearly he lived through turbulent times. A child of immigrants, he lived through World War II, the Cold War, the Civil Rights Movement, and Vietnam.  In each of these, he saw a test of faith. But his faith was about more than religion. He was grounded, she said, in Jewish identity, although he was not particularly observant in adulthood. His faith was not limited to Judaism, but embraced humanity and broader spirituality.

The exhibition explores his early life in Boston and the influence of Jewish traditions and worship, including the organ music, choirs, and cantors he experienced at the family synagogue, Boston’s Congregation Mishkan Tefila. An interactive multimedia display connects pieces of his music to influences in his childhood and the traditions of Jewish music. Most people can probably recognize the opening notes of West Side Story, but few are aware that they explicitly represent the sound of the Shofar, a ram’s horn used in Jewish religious ceremonies to announce holidays, processions, or even the start of war. The exhibit follows his musical training and education from Boston to Philadelphia and New York, and his successes as an internationally acclaimed composer and conductor. The exhibit also chronicles his deep and longstanding commitment to social justice. Photographs, oral histories, and programs document a concert with concentration camp survivors at a displaced persons’ camp in Europe following World War II. Print-outs of his thick FBI files are chilling reminders of the McCarthy era investigations that targeted Jews, social activists, and performers. His commitment to racial equality is demonstrated in casting decisions. The premiere of his Broadway musical On the Town in 1944, for example, included sailors of different races and a Black orchestra concertmaster, Everett Lee. In 1957, the Broadway show, West Side Story, retold the Romeo and Juliet story set in the racially charged gang culture of New York. In the 1970s, Mass protested the Vietnam War. 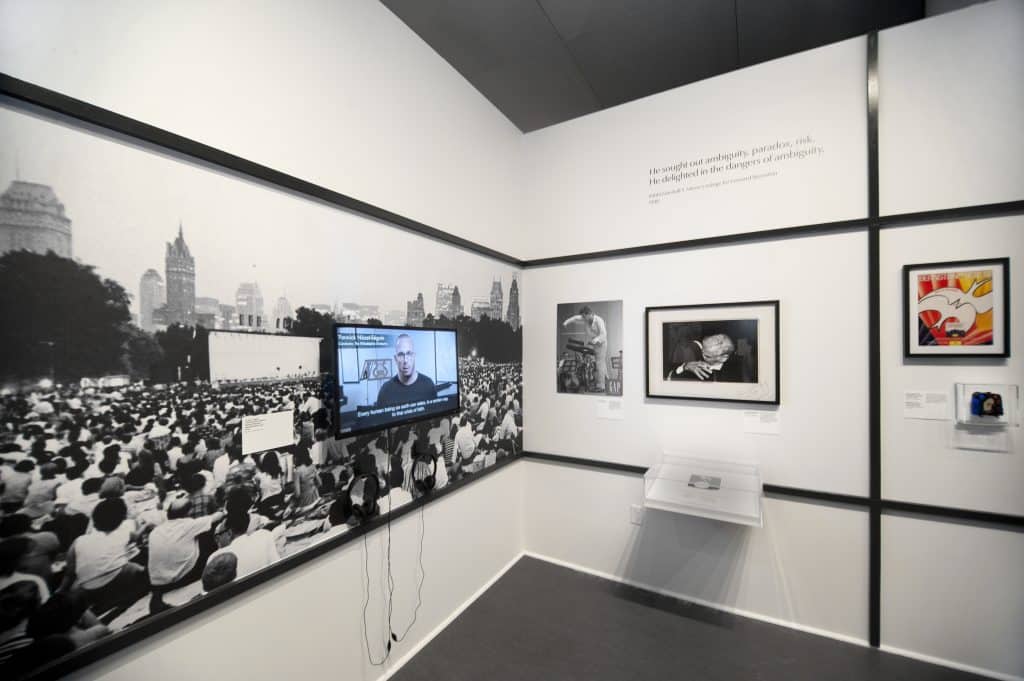 Ivy Weingram described how the exhibit planners tried to balance thousands of possible historical objects available for exhibit with the availability of countless films and sound tracks that were equally important. The exhibition includes about a hundred artifacts, photographs, and documents interspersed with audio and film footage that work together to support the exhibit’s narrative. The audiovisual listening stations and immersive theater spaces are very engaging, accessible, and designed with headphones to eliminate sound bleed in a relatively small space. Two theaters show footage from two of his important works, but take quite different approaches. One theater uses film footage of West Side Story juxtaposed with the many ways that the show’s songs have been used, from comedy skits and films to foreign language productions as a part of shared popular culture. A Saturday Night Live rendition of “I Feel Pretty” had visitors laughing out loud. The other theater takes a more serious approach, showing clips from a production of Mass combined with other artistic protests, including a recent example with the cast of Hamilton.

In the end, the exhibit successfully engages visitors with questions of faith posed by Bernstein by sharing how he wrestled with his own faith, balanced his Jewishness versus Judaism, and fought for social justice through his music and his life. The exhibit closes with another quote from Bernstein in 1972: “My father wanted me to be a rabbi, and there are many people who tell me that his wish came true, that really what I am under all this is a rabbi.”

Although a formal audience study was recently conducted, the results are not yet available. Anecdotal feedback has been very positive and area businesses have reported back that people who had visited were still talking about the experience afterwards over lunch and dinner.

The exhibition opened at the National Museum of American Jewish History on March 16 and is on view through September 2, 2018.  It is supported in part by the National Endowment for the Humanities and will travel to other venues. Currently, it is scheduled to be at Brandeis University in Waltham, Massachusetts, October 4-November 21 and at the Maltz Museum of Jewish Heritage in Beachwood, Ohio, beginning in September 2019.  For more information about the exhibition or how to bring it to your community, contact: