A Moment to Take Stock (and Keep Advocating)

A Moment to Take Stock (and Keep Advocating)

Among its advocacy initiatives, AASLH is an associate member of the National Humanities Alliance (NHA), a nationwide coalition of organizations advocating for the humanities on campuses, in communities, and on Capitol Hill.

In March, Humanities Advocacy Day participants urged Members of Congress to sign on to letters requesting increased funding for humanities programs, resulting in significant bipartisan support. In the House, a record-breaking 175 representatives, including eleven Republicans, endorsed a $12.5 million increase for the NEH, significantly higher than the incremental increases of $2 or $3 million over the past four years. A letter in the Senate, asking for the same increase, also received a record-breaking 44 signers (all Democrats). A record-breaking 106 Members of Congress, including seven Republicans, signed another letter requesting a $44 million increase for the Department of Education’s international education programs (Title VI and Fulbright-Hays). This was a particularly ambitious request for programs that have not received increases for years.

More recently, the House passed funding bills that included significant increases for our priorities. In addition to passing the $12.5 million increase for the NEH and a nearly $17 million increase for the Department of Education’s international education programs, the House has passed increases for the Woodrow Wilson International Center for Scholars, the Institute of Museum and Library Services, the Smithsonian, the National Park Service’s historic preservation programs, and the National Historical Publications and Records Commission, the grant-giving arm of the National Archives.

The Senate has yet to release its appropriations bills. While we know there is bipartisan support for humanities programs there as well, we are less likely to see increases of the same magnitude in the Senate’s bills. The House, Senate, and White House are currently re-negotiating caps for FY 2020 spending that were put in place nearly a decade ago under the Budget Control Act of 2011. Without renegotiated caps, FY 2020’s overall spending limit would be significantly lower than FY 2019’s. The House appropriations bills assume increased caps, and while the Senate bills will also likely assume increased caps, their assumptions will probably be somewhat lower than the House’s. In the end, the House might need to adjust the numbers in its appropriations bills downward if a final agreement sets caps lower than it is hoping. And if the House, Senate, and the President cannot reach an agreement, we may be heading to another government shutdown or a continuing resolution that maintains funding at FY 2019 levels. 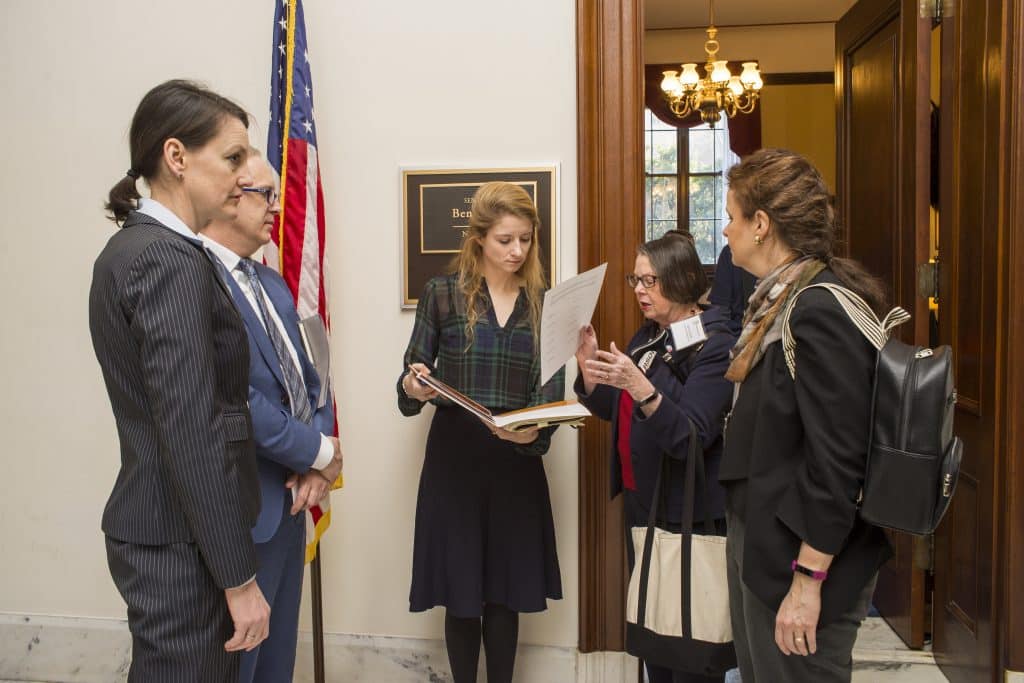 While much remains to be seen, this is a moment to recognize the success of the humanities community’s efforts. In recent years, advocates have sent hundreds of thousands of messages to Members of Congress on behalf of the NEH, IMLS, NHPRC, and Title VI and Fulbright-Hays. We have also deepened research into the impact of federal funding and supported grantees in communicating their impact to local and national policymakers. We have organized in-district meetings that bring Members of Congress together with grantees from their districts so that they can hear firsthand about the impact of the humanities in their communities. (Interested in working with us on one of these meetings? Let us know). And we have hosted briefings for Members of Congress and their staff that bring grantees to Capitol Hill to showcase their work. In June, for example, we were joined by the hosts of the BackStory podcast, who held a live show in the Russell Senate Office Building on  “The Divided States of America,” which offered staffers a look at the importance of humanities research to understanding our contemporary moment.

This is also a prime moment to think about ways in which you can engage Members of Congress when they are home for August recess. Our district advocacy guide offers tips on scheduling a meeting with Members of Congress and for inviting them to events in the district. Offering a Member of Congress or their district staffer a behind-the-scenes tour of a special collection, a new exhibition on campus, or inviting them to visit an NEH-funded summer program are just a few examples of the efforts that have been successful in engaging Members of Congress across the country. Campus government relations officers are great partners for this kind of outreach, and we are always happy to help and brainstorm as well.

The past few years have been a testament to the power of relationship building. And now is a great time to keep building them.