Things to See During the 2015 Annual Meeting: Shaker Village at Pleasant Hill

Things to See During the 2015 Annual Meeting: Shaker Village at Pleasant Hill 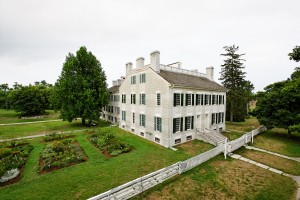 In January 1805, three Shaker missionaries, members of The United Society of Believers in Christ’s Second Appearing, left their home, the main Shaker community of Mt. Lebanon, NY, and headed southwest to the frontier areas of Kentucky and Ohio.  They had heard about a great series of religious revivals taking place on the frontier.  Participants were crediting the spirit of God with incredible actions…including physical actions that they claimed to be unable to control.  This “shaking” piqued the interest of the Shakers in the northeast, and ultimately culminated in the momentous journey that the Shaker missionaries undertook.  After traveling on foot, for nearly 1,000 miles, through a “Wilderness of very tedious Mountains, lonesome rivers, & some disagreeable inhabitants,” they found individuals willing to listen, and ultimately, to respond to the Shaker message (quoted in Stephen Stein, The Shaker Experience in America, 1992, p.58). 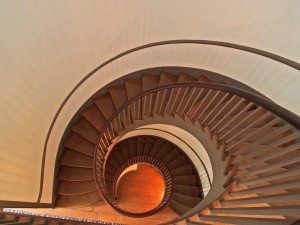 The Shaker community that became known as Pleasant Hill grew out of these events.  Some of the first converts of this missionary endeavor owned land in Mercer County, Kentucky, and this land became the gathering place for many of these western converts.  Within 15 years, there were nearly 500 people that called Pleasant Hill home.  A building program grew with the rise in population, creating a built environment that exceeded 200 structures – dwellings, workshops, offices, meeting houses, and others – during the community’s life.  A farming endeavor extended across 5,000 acres.  As a communal society each person contributed everything they had – tangible and intangible – to the success of the community.

However, none of this would have happened without their religious beliefs.  In fact, Shaker theology was so foundational to many of their practices that it’s almost impossible to speak of their physical accomplishments without mentioning the beliefs.  At its core, the Shakers believed that “Christ in His Second Appearance had come in them.”  According to Brother Theodore E. Johnson, “It is this concept of the indwelling presence of Christ in an active, ongoing way that lies at the heart of all Shaker teaching.  Yet it is not the teaching in itself that has constituted the uniqueness and the greatness of Shakerism, but the way in which that teaching has through the daily activity of men and women expressed itself as a way of life, a way of life that shaped a community, and was consonant with the community by its very nature” (Life in the Christ Spirit, p.3).  From this perspective, the Shakers at Pleasant Hill created a community that facilitated their spiritual growth and development.  This holistic – physical and spiritual – approach undergirded the community for over a century of existence. 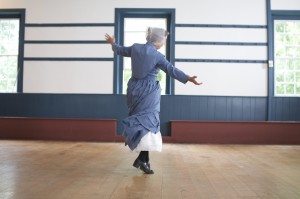 Music in the Meeting House

Following the death of the last Shaker in 1923, buildings and property fell into private ownership.  “Shakertown,” as it was locally known, became one of the many small towns that dotted the Kentucky countryside.  Owners of the buildings adapted them to many common uses, such as gas stations, inns, dining, and car garages.  Interest in the history, however, never diminished in these decades.  Buoyed by a heightened interest in historic preservation in the central Kentucky region, a group of preservationists formed Shaker Village of Pleasant Hill, Incorporated in 1961, acquired former Shaker property, and undertook a massive restoration effort that has resulted today in one of the truly unique historic sites in the state of Kentucky, as well as in the entire country.

When visiting Shaker Village of Pleasant Hill today a host of unique sights exist that in various ways allow one to connect to both the natural and cultural history of the site.  Over 30 historic structures still stand, housing exhibits and craft demonstrations.  A 3,000 acre nature preserve contains nearly 40 miles of hiking trails on former Shaker-owned land.  The cultural and natural history can be explored on foot, carriage ride, or even on a riverboat.  There is more than can be done in a day, and in order to facilitate multi-day visits, dining and overnight lodging accommodations are available.

Come early or stay late to the AASLH Annual Meeting in Louisville and plan a trip to Shaker Village of Pleasant Hill.  For more information visit www.shakervillageky.org.

The Power of Place for Small Museums Gallery

The Power of Place for Small Museums

Exploring History Through the Power of Place Gallery

Exploring History Through the Power of Place