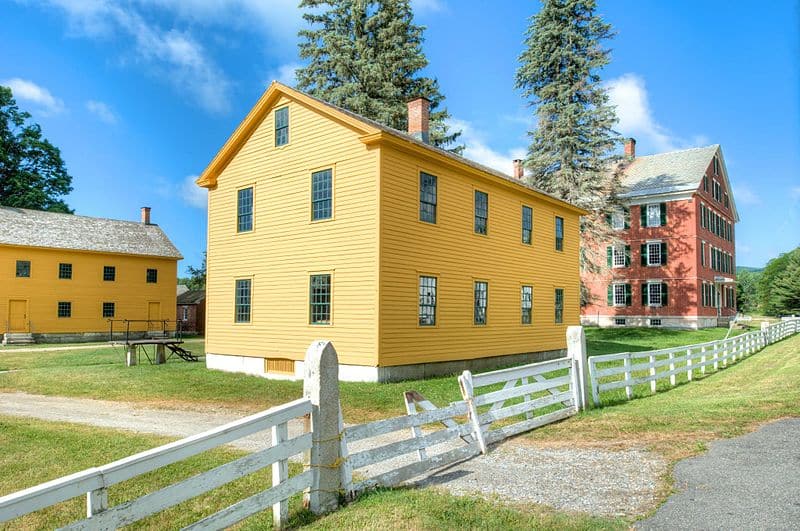 By Barbara Franco, Religious History Affinity Community Chair
Adapted from her presentation at the 2019 Organization of American Historians conference. 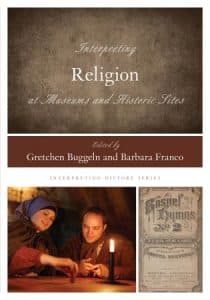 Interpreting Religion at Museums and Historic Sites was published in August 2018 by AASLH and Rowman & Littlefield as part of their Interpreting History series. The idea for a publication on interpreting religion grew out of discussions with colleagues and my co-editor Gretchen Buggeln, professor at Valparaiso University. Together we shared a commitment that religion was too important as a topic in American history for museums to avoid. While I had some experience with interpreting religion,  I wasn’t sure I knew what questions to ask, and definitely didn’t have all the answers. I was curious about what experiences other museums have had.  So I asked everyone I knew in museums, posted queries on listservs, and contacted curators of exhibitions. The case studies chosen for the book represent some of these responses and, I hope, a variety of religious traditions, locations, and approaches.

Despite religion’s critical importance to the social history approach that most museums have adopted, we heard again and again from colleagues that museums often take religious practices, religious organizations, and religious beliefs off the table as subject matter. There are good reasons for this reluctance: almost anyone you speak to about interpreting religion also acknowledges that it is a difficult and sensitive subject for museums. A major goal of the book was to identify and unpack the issues that emerged from the case studies.

Many museums believe that the topic of religion is inappropriate—even legally prohibited by the “separation of church and state”—in America’s public institutions. For museums that are interested in attracting school groups as a significant part of their annual attendance, there is a real concern that teachers will not be able to justify a museum field trip or program that includes any mention of religion, no matter how objective or non-sectarian it might be. So what does the Constitution actually say or not say about religion? The main Constitutional reference to religion, found in the First Amendment, states: “Congress shall make no law respecting an establishment of religion, or prohibiting the free exercise thereof.” These two clauses, covering establishment and free exercise, continue to be hotly debated.

The often-cited phrase “separation of church and state” is not actually written anywhere in the Constitution. That language comes from the letters and writings of Founding Fathers, with the phrase first used by Roger Williams, founder of Providence, Rhode Island, and a proponent of religious freedom. In 1644 he wrote, “When they [the Church] have opened a gap in the hedge or wall of separation between the garden of the church and the wilderness of the world….” Thomas Jefferson reiterated the wall of separation phrase in an 1802 letter to the Danbury Baptists who would have recognized and appreciated the reference to Roger Williams: “… I contemplate with sovereign reverence that act of the whole American people which declared that their legislature should “make no law respecting establishment of religion or prohibiting the free exercise thereof,” thus building a wall of separation between church and state.” 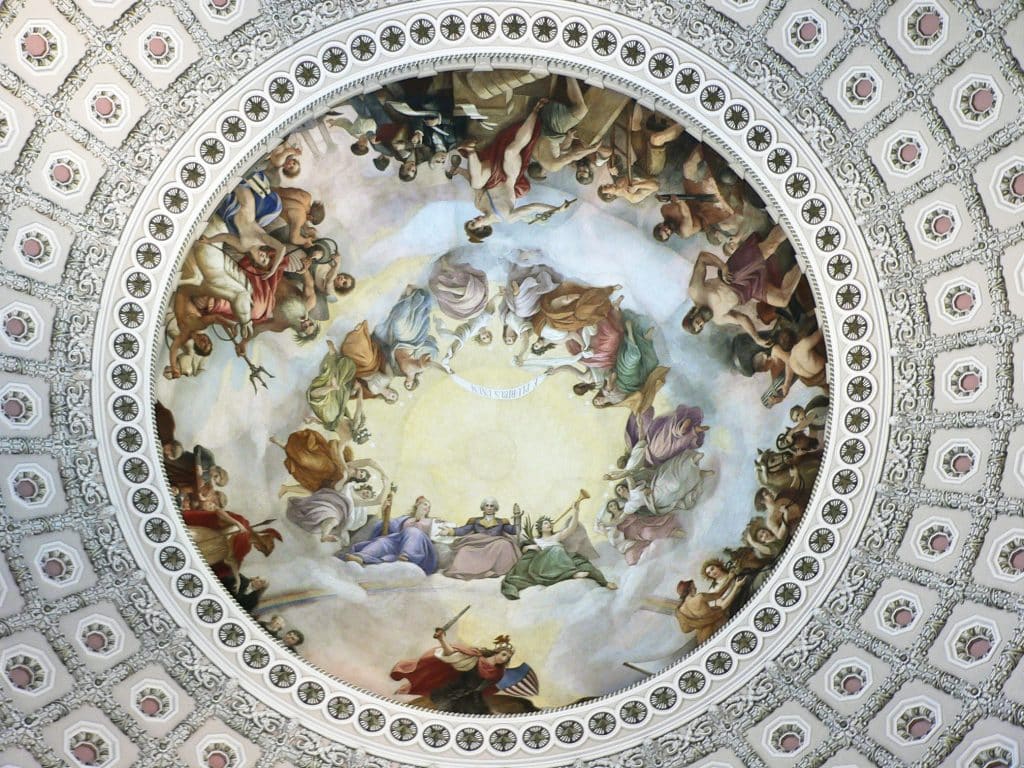 Many of the case studies in the book represent museums that are part of state-sponsored history organizations or federal agencies. The diversity and centrality of faiths in the founding of states like Pennsylvania and Rhode Island make it difficult to tell state history without addressing religion. Fred Beuttler’s case study of the United States Capitol perfectly illustrates the ambiguities and tension of conflicting aims when interpreting religion in public spaces: staff and designers of the Capitol Visitor Center’s exhibit, E Pluribus Unum – Out of Many One, sought to minimize the role of religion while members of Congress often insisted on including references to religion in the history of Congress and the Capitol. Elizabeth Kryder-Reid’s case study of California missions describes the uneasy balancing act of the California Missions Preservation Act of 2003, which granted federal government support for religious sites with still active worship communities, provided the funds were applied only to physical preservation and security and not to interpretation.

The issue of proselytizing came up again and again in the case studies. Visitors and museum staff can be very sensitive to any suggestion or appearance that a museum, even a sectarian one, is actively promoting a particular set of religious beliefs. Visitors are wary of being “preached” to, and museum staff worry that any interpretation of religion may be construed as proselytizing. Diane L. Moore in her book, Overcoming Religious Illiteracy: A Cultural Approach to the Study of Religion in Secondary Education, makes a useful distinction between “teaching religion or promoting a particular religious worldview, and teaching about religion from a nonsectarian perspective.“ But it can be difficult for both visitors and interpretive staff to make this distinction. For many Americans, talking about religion in an objective way, without trying to promote one’s own views, is hard to imagine.

Many of the case studies remind us that visitors bring their own religious faith and preconceptions with them. When museum exhibitions and programs prompt visitors to talk about religion, visitors themselves may be the ones to engage in defending or disproving doctrine. Some historic site staff encounter visitors who feel the need to challenge beliefs presented by the museum, even in a historical context. The Hancock Shaker Village case study reports that visitors often confront interpreters about the Shaker practice of celibacy. Some visitors also assume that museum interpreters must themselves be followers of the religious beliefs presented and try to convert their guides during tours.

Many of the case studies recount tensions between insiders and outsiders, believers and non-believers. This is especially true for museums that have an institutional connection to a specific faith tradition. To complicate matters, museum staff may themselves be a part of a living religious tradition that they are interpreting either historically or as a current faith community, and may thus find it difficult to separate their own faith practices from objective historical analysis. For the non-believer or outsider, it may be equally difficult to be objective, because outsider perspectives can also be prejudicial.

Philadelphia’s Arch Street Meeting House case study describes the reinterpretation project that they undertook. It challenged docents who were mostly Quakers to refocus the content of their tours to reach non-Quaker visitors to Philadelphia. While visitors appreciate being able to have a conversation with a practicing Quaker about personal faith, the site also has to guard against individual docents expressing their personal or political views. They solved this issue by designing a historical tour with one set of docents, followed by an opportunity to “Ask a Quaker” about aspects of  religious practice and beliefs. The Abbe Museum in Maine also works closely with Native people to develop decolonizing policies that protect religious beliefs and practices from misappropriation by non-Native visitors.

There is an inherent conflict between the perceived unchanging truths and beliefs of a faith tradition and the role of history to document and interpret change over time. Many present-day practitioners of a faith may assume that their religious experience must be similar to those of people within that faith in the past. Interpreters need to be sure to appropriately contextualize religious stories, so that visitors can distinguish between religious attitudes and practices that have changed and those that have stayed constant.

The case study of George Washington’s Mount Vernon shows that twenty-first-century religious understandings cannot be assumed as the norms for people in other times.  Reenacting the events associated with George Washington’s funeral involved research into mourning customs in the late eighteenth century in general and specifically at Mount Vernon. The museum’s goal was to present what was known about George Washington’s practice of religion, both privately and in his various public roles, without taking sides in the “culture wars” raging over the issue of the Founding Fathers and religion. While the public was very interested in the program, one historian complained that the funeral was reenacted “with more than the original pomp and ceremony,” a statement not supported by the extensive documentation about period funerals of upper-class Americans at that time. The important lesson that the Mount Vernon staff learned was that even historians need to guard against assuming that they understand religious practices of the past without rigorous documentation. 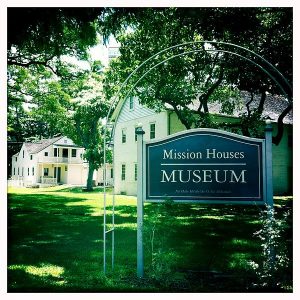 Without context, religious artifacts are easily misappropriated and misunderstood by visitors, who draw their own connections and conclusions. Basic information for an artifact means knowing who produced it and where and when it was made. But we also need to understand what was going on during that time; how language, concepts, and terms were used by the people whose lives those material artifacts represent.

The Hawaiian Mission Houses Historic Site and Archives case study reexamines the missionary history of Hawaii based on newly translated letters that show the Hawaiian chiefs as active participants in conversion to Christianity rather than as helpless victims of Western domination. This may be an unsettling interpretation in a period when historians are critically reexamining colonialism. For religious history it is especially important to analyze rather than judge, and to place beliefs in their historical context rather than viewing them by present-day standards or norms.

Religion is a challenging subject, in part, because of its complexity. Even the question “What is religion?” is difficult to answer. Is it denominational history, personal experience, theology, religious texts, or all of the above?  For many, religion is more strictly defined as an organized set of practices identified with a formal tradition or official religion. From this perspective, religion is defined by the doctrines and practices determined by religious professionals and the institutions they maintain. For others, who might prefer the terms “faith” or “spirituality,” religion is constituted by more personal expressions of belief. In reality, lived religion is a dynamic interaction of both ideas and practices. Charles Lippy’s definition of popular religiosity may be useful: “the ways in which individuals take religious belief, interpret it in practical terms, and put it to work to do something that will give order and meaning to their lives.’” But complexity isn’t necessarily a barrier and can also be an opportunity to invite visitors into a deeper engagement with American history. Ephrata Cloister’s decision to include information about Conrad Beissel’s idiosyncratic beliefs helps explain the lifestyle of the community. 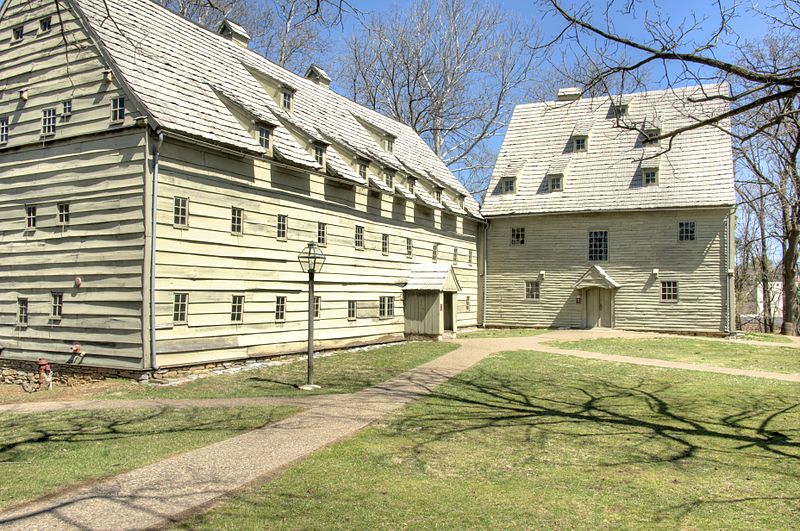 The historical skills of critical thinking, understanding, and empathy seem more important than ever in a time when religious fragmentation, controversy and confrontation seem to be growing.  What should museums look to in the future?  Three suggestions emerge from the case studies:

Looking at religion historically allows museums to include a broad range of religious subject matter to interpret past actions and the lives of people.  Museums must also learn more about their visitors, the questions they bring, and if and how they want to engage with religion in their museum experience. Some of this may go beyond what museums typically think of as their sphere of interpretation, challenging museums to consider their own biases. In a time of growing secularization, visitors may not seek religious instruction in a particular faith, but they may hunger for spiritual experiences. Is there an opportunity for museums and historic sites to engage visitors with historical content on a deeper level by engaging them in experiences that have a spiritual dimension? How can or should we keep that separate from experiences that are purely secular and educational? Can museums help foster an American commitment to pluralism and religious freedom? History, and religious history, will continue to be relevant as long as museums are willing to ask compelling and provocative questions and provide visitors with opportunities to connect with the past in ways that deepen their understanding and bring meaning to their lives.

Continue this discussion at the “Diversity, Inclusion, and Religion” Community Conversation at the Annual Meeting in Philadelphia.